A Century-Old Denver Home Remodel One Room at a Time

It wasn’t exactly a well-conceived plan: After living in his Cheesman Park home for two years, the homeowner of this classic Denver Square decided that his yard needed work, and hired a landscape architect. “I had no plans for tackling the interior,” he says.

But it quickly became apparent that the updated yard called for an updated home. “As the yard got nicer,” he says, “I thought, ‘Well, I’ll redo one room at a time.’” After all, though the house was a bit age-weary, the woodwork and leaded glass windows were reminders of its former grandeur. One room led to the next, with so many different teams—brick masons, electricians, designers, contractors, woodworkers, plumbers—moving from room to room that at times it was like a train station. “It was a true labor of love for everyone,” says interior designer Beth Armijo, who joined the project a year and a half after it was started. “And it was a blessing that the owner is such a patient man.”

Patience is a virtue in any remodeling project, but in a house more than a century old, with a renovation that took four years to complete, it’s an absolute must. “My ultimate goal was to let the woodwork and leaded glass dictate the design direction,” says the homeowner, “to disturb as little plaster as possible and to make it a sanctuary for me at the end of the day.” 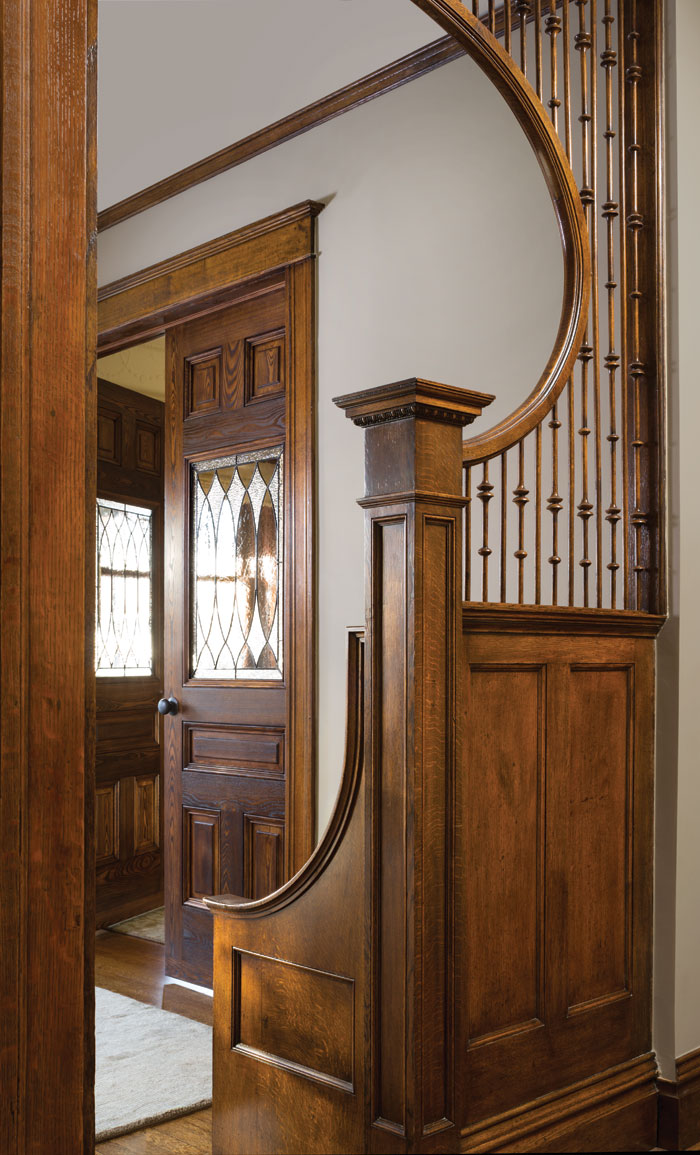 The original wood entry has been cleaned up and refinished, offering a taste of authenticity to everyone who enters. 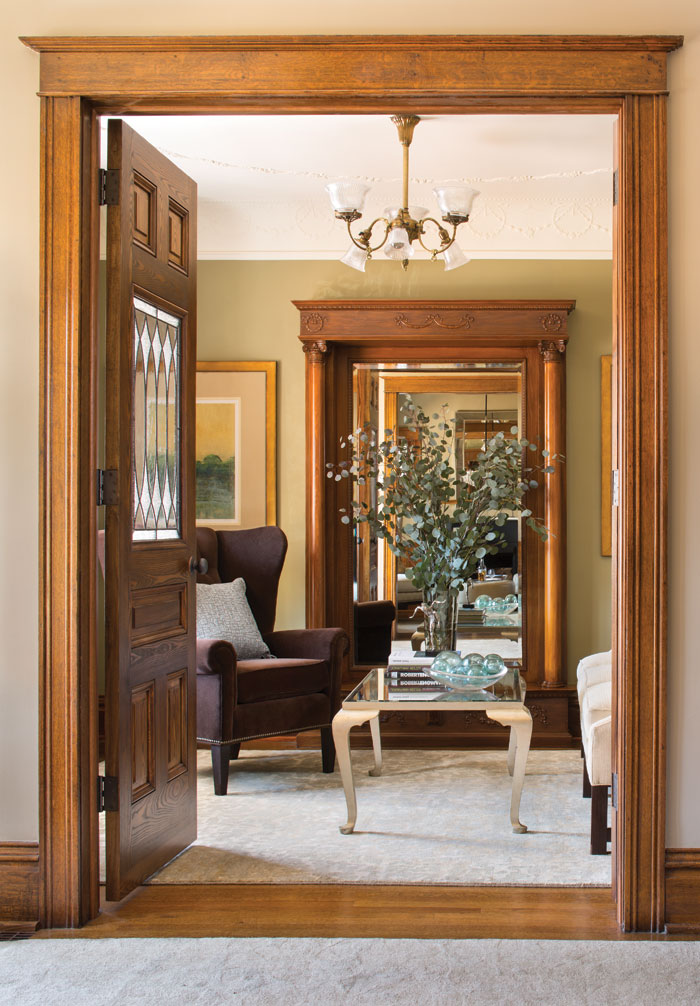 The doors to the sitting room are new to the house but vintage in age. 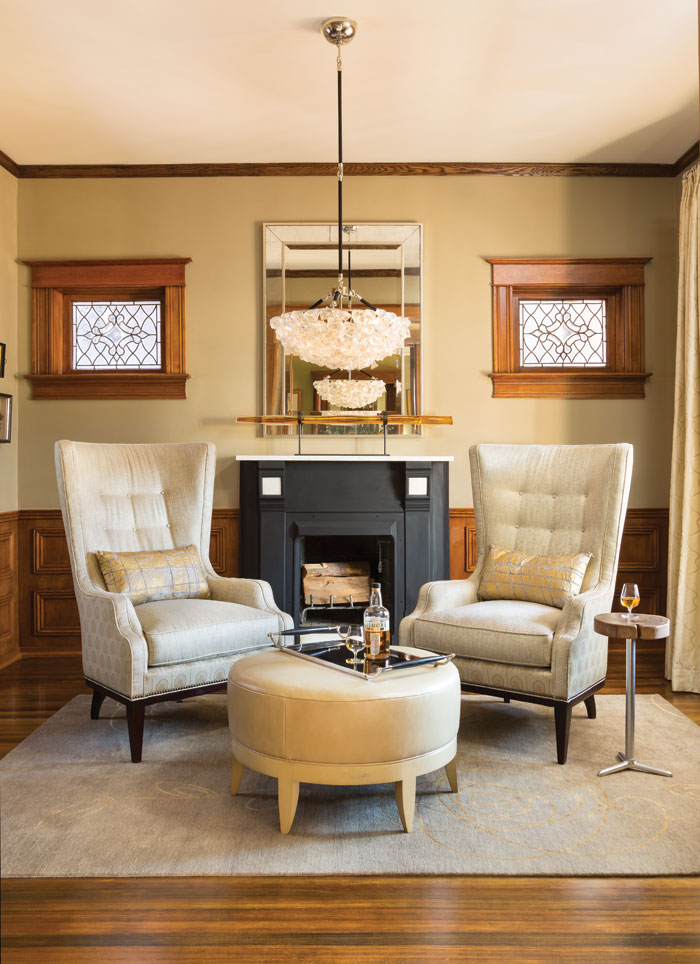 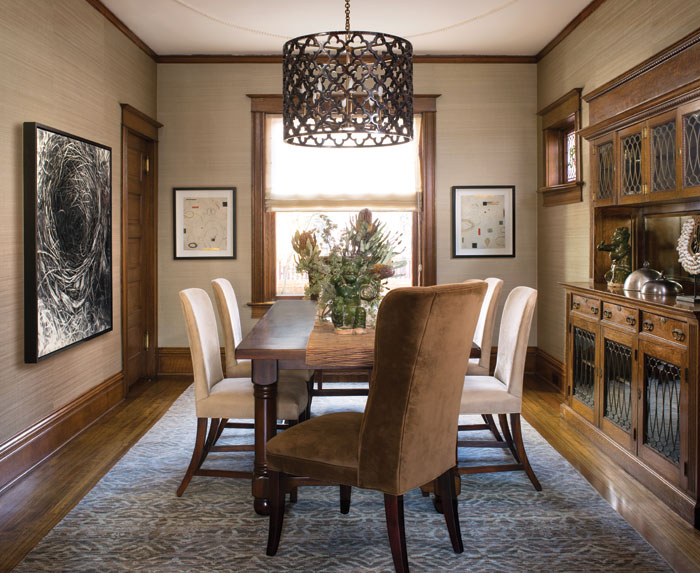 The original built-in china hutch sits in contrast to the sleek lines of the table and chairs, which belong to the homeowner. A handcrafted chandelier lights the sage-colored grasscloth walls; the room is grounded by an Indian silk-and-wool rug from Denver-based Authentic Rugs. Robin Cole Smith's encaustic, Instinct III, and Don Quade's works are from Walker Fine Art. 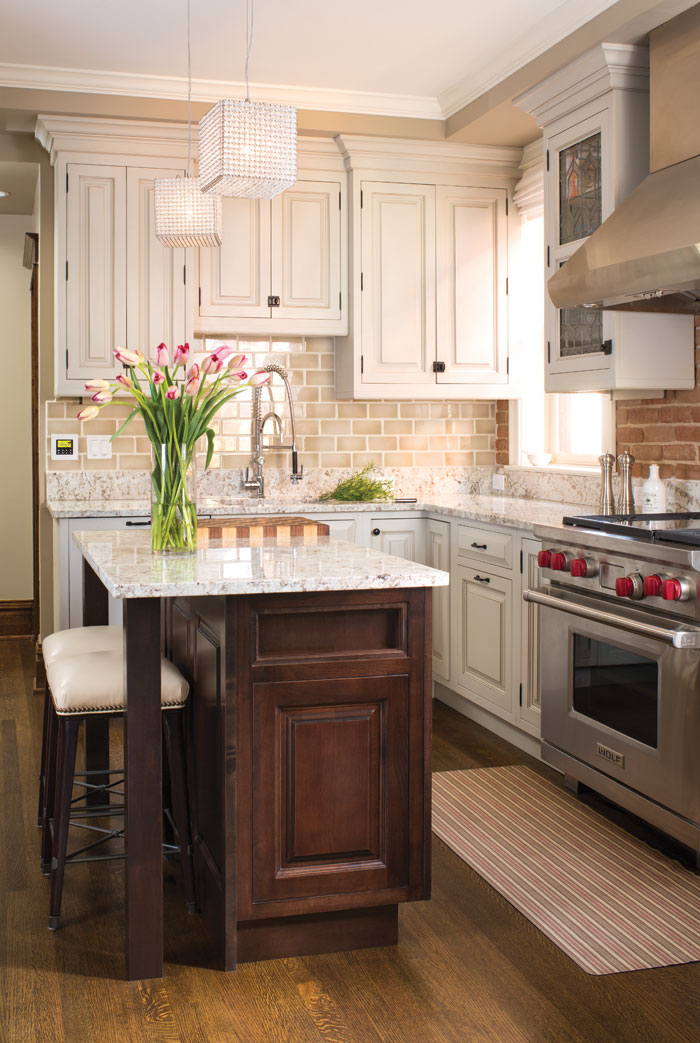 A complete renovation, the small kitchen soars with both charm and efficiency. Designer Chris Awadalla wanted the room to be the gem of the main floor with its custom cabinets (notice the icebox latches and exposed hinges) and simple but elegant finishes. Designer Beth Armijo selected the Hickory Chair stools and glamorous McEwen pendants over the island. 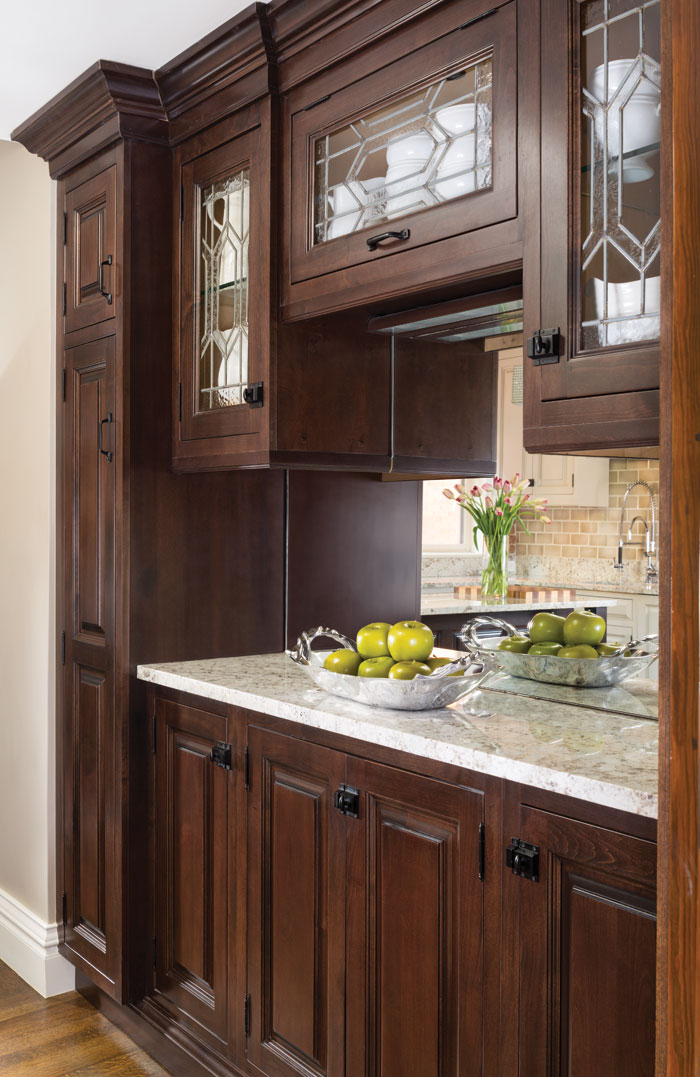 Awadalla crafted a small buffet in the kitchen to create more storage and serving space. One of his favorite "enlarging and brightening" techniques: the mirrored backsplash. 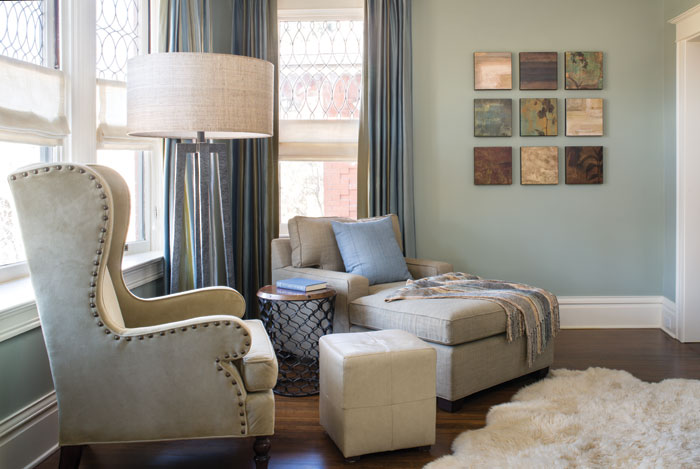 Armijo selected a modern floor lamp as a counterpoint to a traditional wingback chair in the sitting area of the master bedroom. A chaise lounge, nestled amidst soothing shades of blue, green and ivory, makes for a cozy reading corner. 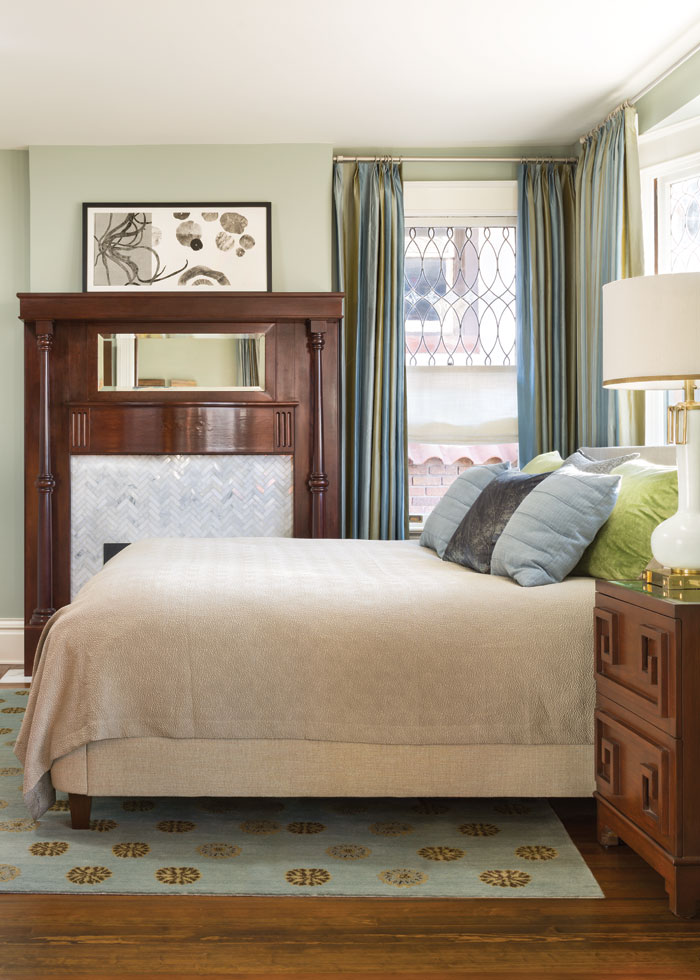 An oasis of calm, the master bedroom mixes soft colors, all anchored by a Thomas O'Brien rug. The original fireplace was rebuilt using new herringbone mosaic tiles from Decorative Materials. Artwork by Judy Anderson is from Walker Fine Art. 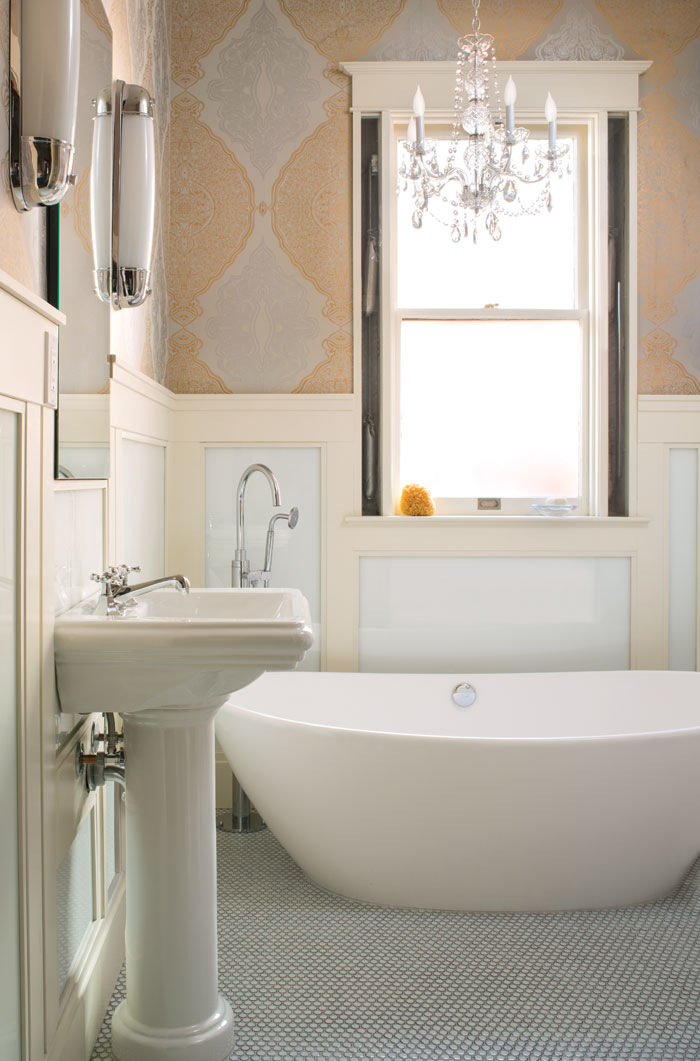 The bathroom takes traditional design to new heights. "A contemporary bathroom would be out of place," he says, "but we used a modern freestanding tub—reminiscent of a claw-footed tub—and a pedestal sink and wall sconces that are updated versions of vintage ones." Glass paneling in the wainscoting adds another modern element. Awadalla highlighted  the room's only window by covering the original cantilever weights in Plexiglass. "It's like having x-ray vision into the bones of the house," he says.