A Boulder Victorian Back to Its Original Bones

Corey stands—dressed in jeans, a flannel and midcalf boots—in front of the square parlor window that takes up nearly the entire wall of her downtown Boulder home. It’s the original window from 1877, the single gem that tugged her to take on a massive remodel. At one point the Mapleton Victorian resembled a set from a Western movie; when they began the remodel, only the front and sides remained.

“This support wall was the only one standing in here,” she says, her bright eyes focused on the velvet-blue wall that once had a staircase going through it. “They tied it to a tree out back for support. In big windstorms, Joel [Boulder builder Joel Smiley of Smiley Construction] would come down at 2 a.m. to make sure it was still standing.” 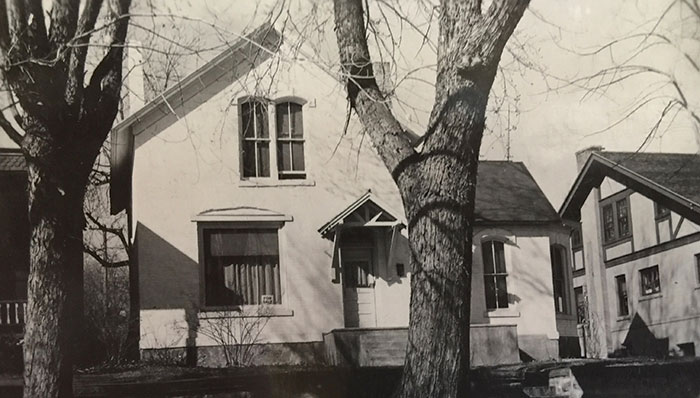 The home had been remodeled in the ’50s and ’60s, with much of the original charm stripped out or plastered over. The front porch had been removed, original hardware replaced, false ceilings built, 10-inch vinyl siding installed, and doors and fireplaces drywalled in. “It felt like the house really had been ruined,” Smiley explains. “It had been amputated and embellished to the point that it was no longer contributing to the district. It was interesting to try to figure out what it was and what it could be.”

The amount of work the home needed gave them a lot of freedom in the process, says Corey. “But at the same time it was kind of sad. We’re from New England, and we love old houses.” Corey’s husband, Karl, whose beloved 1974 FJ40 Toyota Land Cruiser rests on a special lift in the two-story garage out back, adds, “The irony is that when it was originally remodeled, they were making beautiful cars—but not beautiful homes.”

They went to the historical society and found some old photos of the home, which is how they learned the porch had been removed. From there, it was like a treasure hunt; they broke into the false ceilings to discover gorgeous high-arched windows. They ripped down drywall, exposing the red brick that now grounds the open, airy rooms. They moved the staircase and re-created the original porch—only now with ceiling heaters and planters bursting with flowers.

The main floor is spacious, with an open floor plan all the way to the back of the house. It includes a parlor and an office for Karl. “That was the first thing I did when we moved in,” says Corey, pointing to the floor-to-ceiling bookshelves, organized by color, that arch like a rainbow around and above the pocket doors of her husband’s study. “It took me four hours. It makes me so happy.”

The basement—which has a movie screen, another guest bedroom and a storage room (“This was supposed to be the exercise room,” laughs Corey, pointing at the boxes stacked up on the treadmill)—was excavated below the original foundation. “It was pure rock under there,” Corey says. “Joel said he’d never seen anything like it.”

When asked about her background—Corey designed the interiors herself—she laughs and dismisses her obvious talent with a shake of her head. “I spent a lot of time online. I made a Pinterest board and shopped on overstock.com.” When pressed further, she reluctantly admits, “I’m a seamstress, and I love to create things. I just don’t like selling myself.” 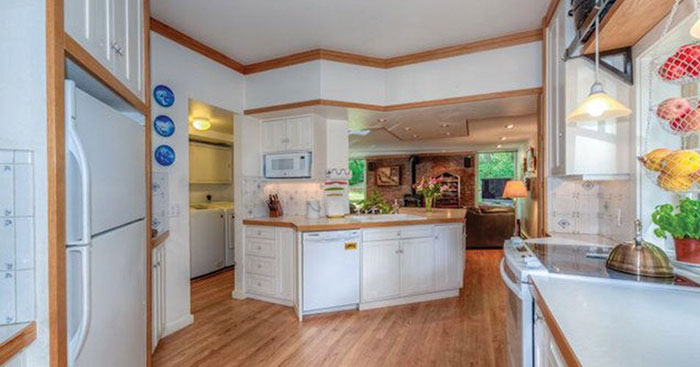 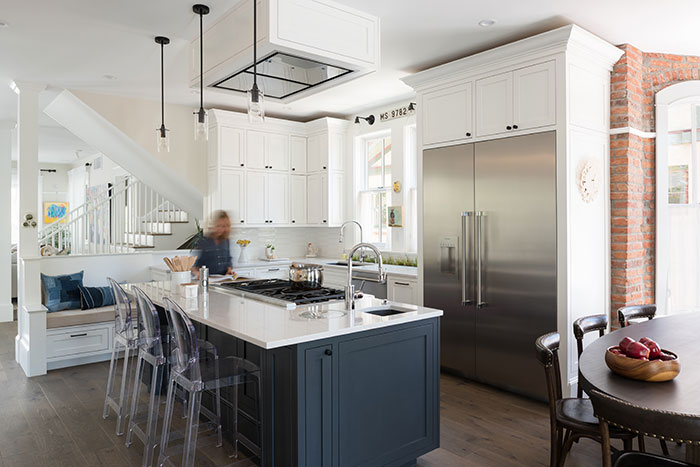 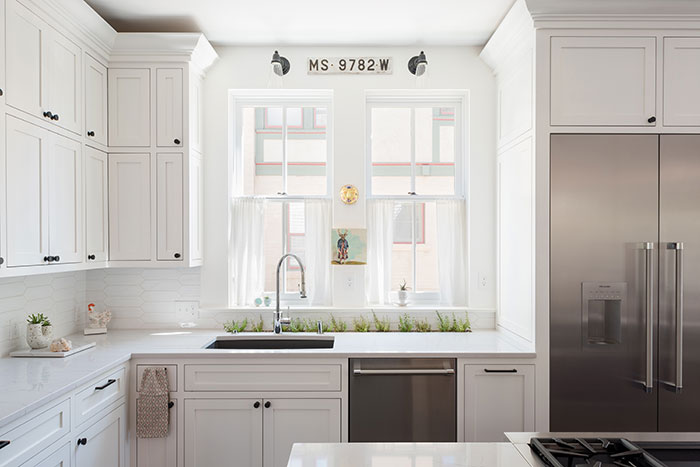 “I think it [the kitchen] turned out exceptionally crisp,” Smiley says of the interior aesthetics. The cabinets, fabricated by Smiley’s team, are painted in Benjamin Moore Chantilly Lace. “I used that color in a house in Boston,” Corey says. “Once you find colors that work, you don’t have to look anymore.” The chairs resemble Philippe Starck’s classic Ghost Chairs but at a fraction of the cost, from overstock.com. “I became an excellent bargain shopper,” Corey says. 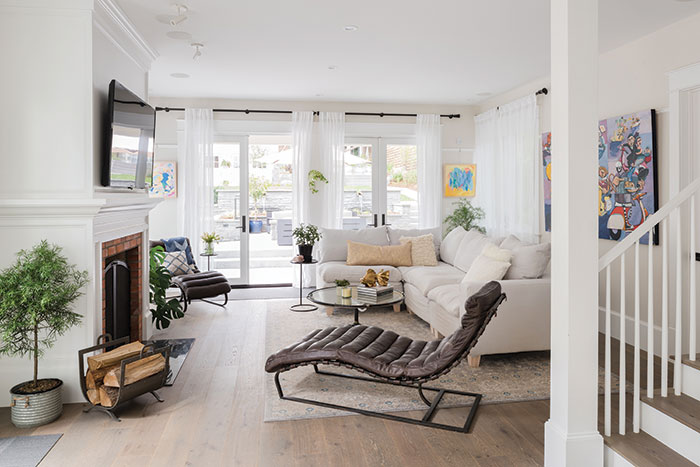 Corey calls the Oviedo chair from RH the “sleeping chair.” Added glass doors sweep the home with light, while a simple color scheme of white, gray and deep blue keeps the overall feeling clean and natural. The paintings that flank the French doors are by Corey’s friend Missy Sanchez. Smiley incorporated an EPA-approved wood-burning fireplace, which is approved to burn cleanly any day of the year. “It’s a very state-of-the-art house from a tech standpoint,” he says. “They also have a meaningful solar array and a geothermal heating and cooling system.” 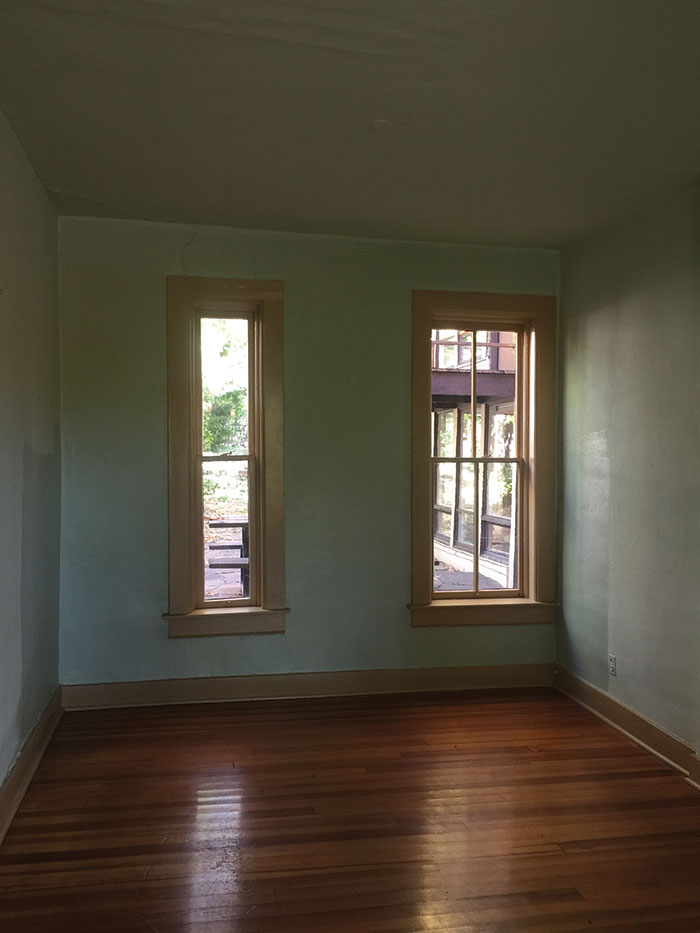 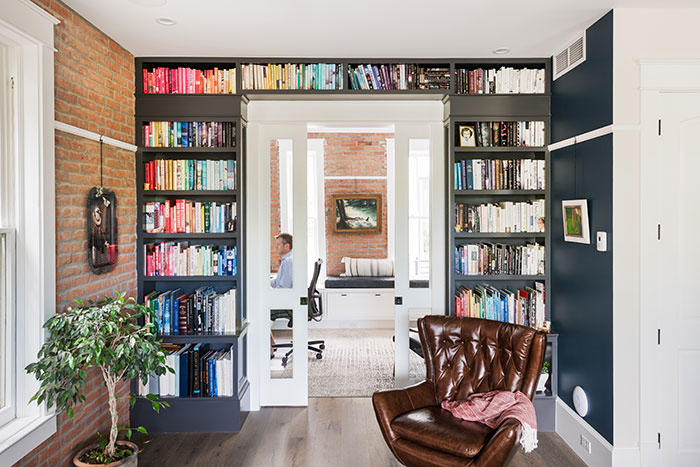 Smiley added a fireplace, partition and bookcase behind the parlor, so Corey’s husband, Karl, could have his office in the back. Karl chose this room for his office, which he then helped design, because of a narrow window that has become crooked over time. “It’s my favorite thing in the house,” he says, adding that he adamantly insisted it never be straightened. 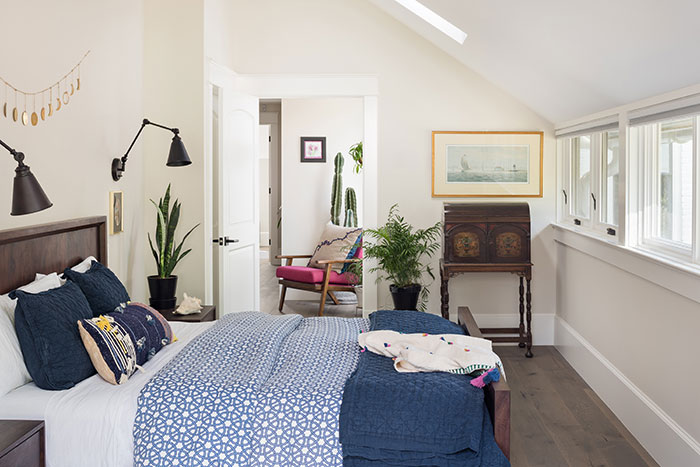 The four bedrooms upstairs—the master (pictured), one each for teenagers Nick and Liesel, and a guest room—are cozy and perfectly proportioned. “I’m never going to get my coffee and come hang out in my bedroom,” Corey says. “We didn’t feel like we needed a lot of space there.” Everything in this home is a balance of old and new: The chest against the far wall belonged to Corey’s parents, while the chair just outside the door is from World Market.

“[The narrow, crooked office window] is my favorite thing in the house.”
— Karl, Homeowner 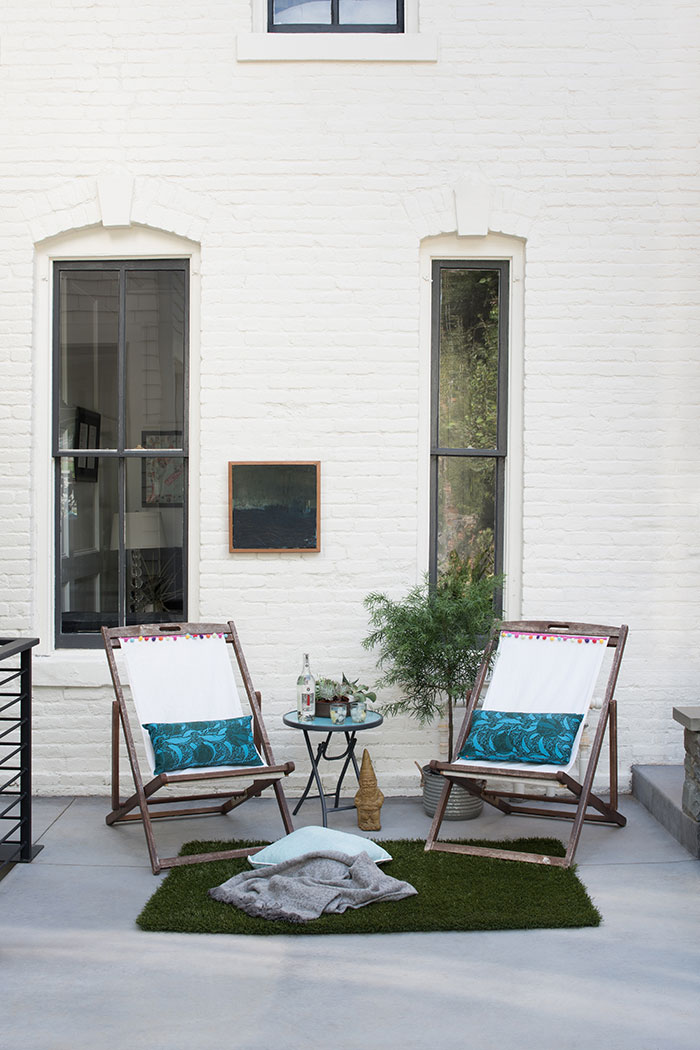 Corey’s irreverent humor shines through in her décor here, with a patch of AstroTurf serving as the focal point for this outdoor alcove. “We got pet-grade AstroTurf for the narrow side of the house where the dogs go, and they had a piece left over,” Corey says. “I thought it was kind of fun.” She bought the chairs at World Market, replaced the original fabric sling with canvas from Merchant & Mills, and sewed on the pom-pom fringe, “because it needed a little something-something.” 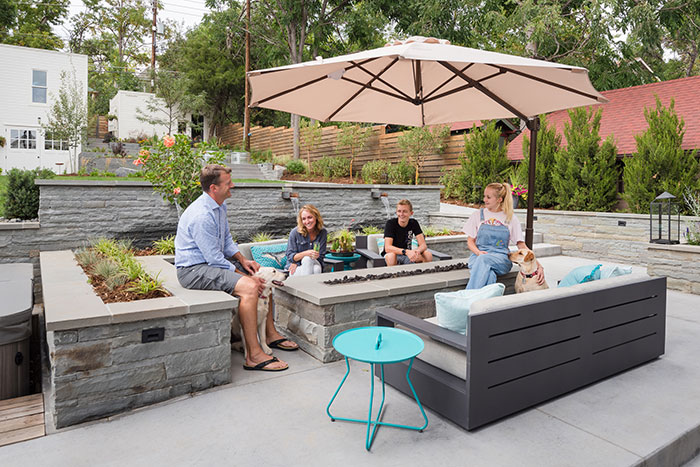 Right angles prevail here, with a rectangular fire pit and planters custom-made by 1st Green Colorado, and furniture by Restoration Hardware. Karl, Corey, 15-year-old Nick, 17-year-old Liesel and two of their ragtag troop of canines hang out on a typical weekend morning. They added the water features at the last minute, which create a soothing vibe for all but Mochi, the golden retriever puppy on the left, who loves to frolic in them. 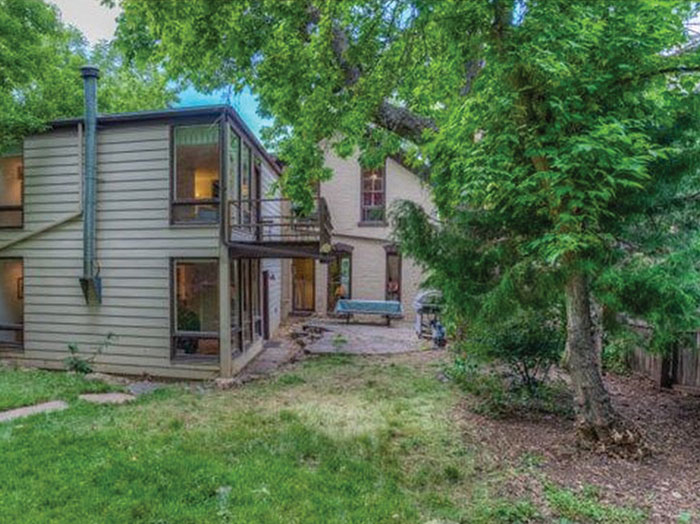 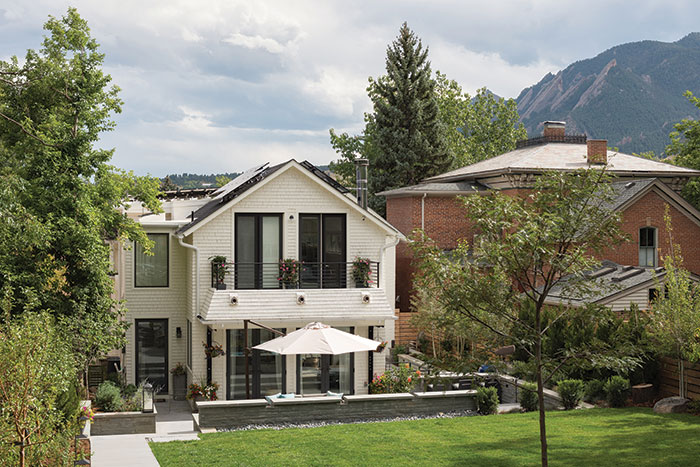 The lot is huge by downtown Boulder standards, and the couple hired landscape architect Brady Smith from 1st Green Colorado to help them design it. The original addition was completely demolished. The balcony overlooking the patio is off the couple's master bedroom. 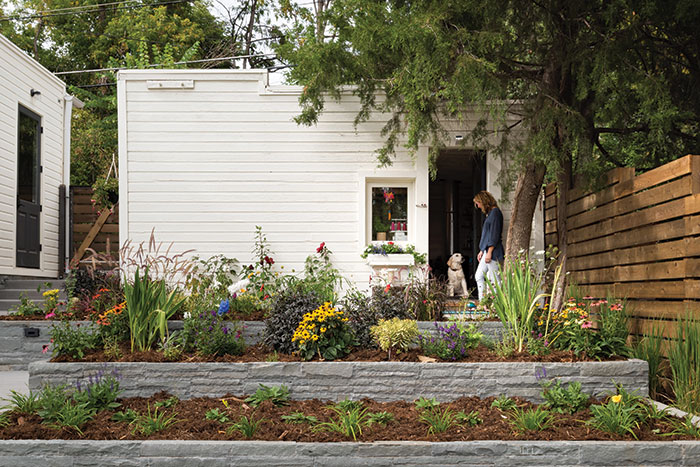 Corey's sewing studio is just steps from a two-story, below-grade garage that houses Karl’s FJ40 (complete with a lift that brings it to street level).