A designer known for using vibrant color takes on the challenge of working in a neutral palette. The result is as unique and multifaceted as the homeowner herself 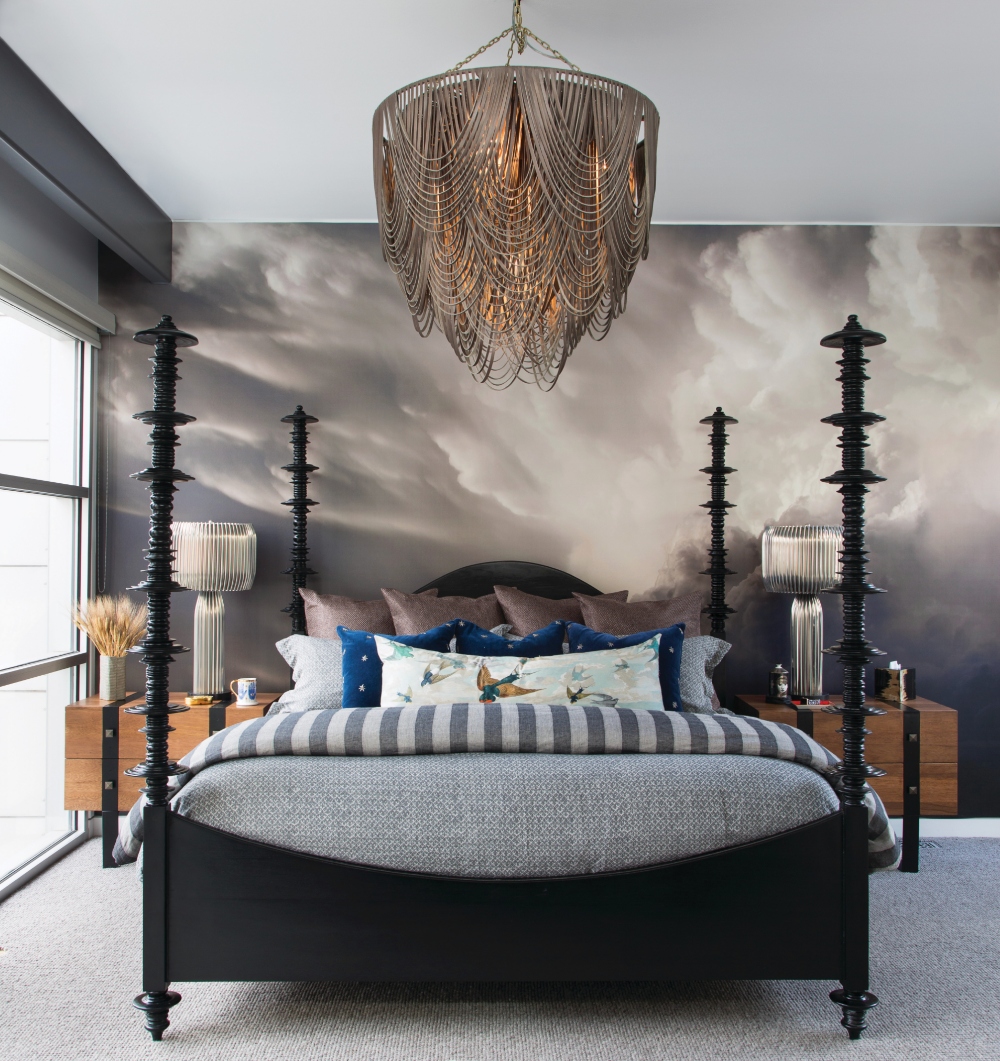 Master Bedroom The homeowner provided cloudscapes as design inspiration. Schroder found an affordable vinyl mural from Pixers.us, and then added a chandelier made of gray leather straps from Ngala Trading Co. to complete the moody sky. A Ferret Bed from Objets, Ltd., lends a warm, eclectic touch. Photography by Emily Minton Redfield.

“That set the stage for the whole house,” says designer Katie Schroder, gesturing toward a painting of a young woman that hangs behind the dining table in a downtown Denver townhome.

The painting—Russian Fragility III by artist Gabriel Moreno—is an astonishing portrayal of human complexity: tough and vulnerable, powerful and delicate, masculine and feminine. It’s edgy and bold, and the homeowner—a professional from a deeply rooted Colorado family— wanted it to serve as the starting point for designing the modern space.

“The homeowner travels extensively. She has eclectic taste, and she loves art. She wanted this house to be a canvas for that,” says Schroder, who owns Denver’s Atelier Interior Design. The painting is mostly black and white—which also happens to be the homeowner’s preferred palette.

Schroder, however, is known for her artful use of vibrant color. “I told her when I met her that I’m not your average gray-and-white designer,” Schroder says, laughing. “She had met with other designers who were more in that vein, but we really connected on a personal level. So she said, ‘Give me gray, black and neutral, with maybe a pop of color.’ And I said, ‘OK.’” To create big statements while sticking to a limited palette, Schroder delved into texture and diversity. She incorporated unusual objects, like a chandelier made with gray leather straps from South Africa.

She peppered in Old World touches, such as a four-poster bed and spindle desk. And here and there, she added that burst of color. “I think in color,” she says. “It was hard for me to tone it down. But it wound up being really fun—a new perspective keeps my job fresh and alive.”

Another challenge was to create a crisp, tailored look that still feels warm and inviting. (The homeowner wanted a dramatic change from her previous traditional home in northwest Denver.) Schroder struck this balance by layering in furnishings and finishes that have a softness to them—adding an item with antique patina or an organic pattern, for example. “She and I both like more masculine things,” Schroder says. “And we softened them in creative ways without ever going frilly.”

The 10-year-old, four-level home (“stairs for days,” Schroder laughs) didn’t need much architecturally, so they were able to work only with builder Tim Saul of Saul Construction. They created a space for the homeowner’s bikes and skis and “Colorado gear” in the basement, along with a home gym.

They extended the kitchen, turned the second-level master bedroom into a guest room and office, and transformed the top level into a master suite with a patio and kitchenette. All the furnishings are new, save an antique player piano that is an heirloom of the homeowner’s family. (“It became a big deal, that piano,” Schroder says. “We had to get a cherry picker to get it out of her old home and move it into the new one.”)

To make it jibe with the overall, subtle rock ’n’ roll feel, Schroder hired a local company to re-stain and update it with leather accents and nailheads. “Everything in here has a cool Stevie Nicks vibe,” Schroder says.

The homeowner collaborated with Schroder on every detail. “It’s rather unusual to work with a client who wants to be as involved throughout the whole process,” Schroder says. “It did take us two years to finish it,” she adds with a laugh, “but it was definitely more satisfying in the end.” 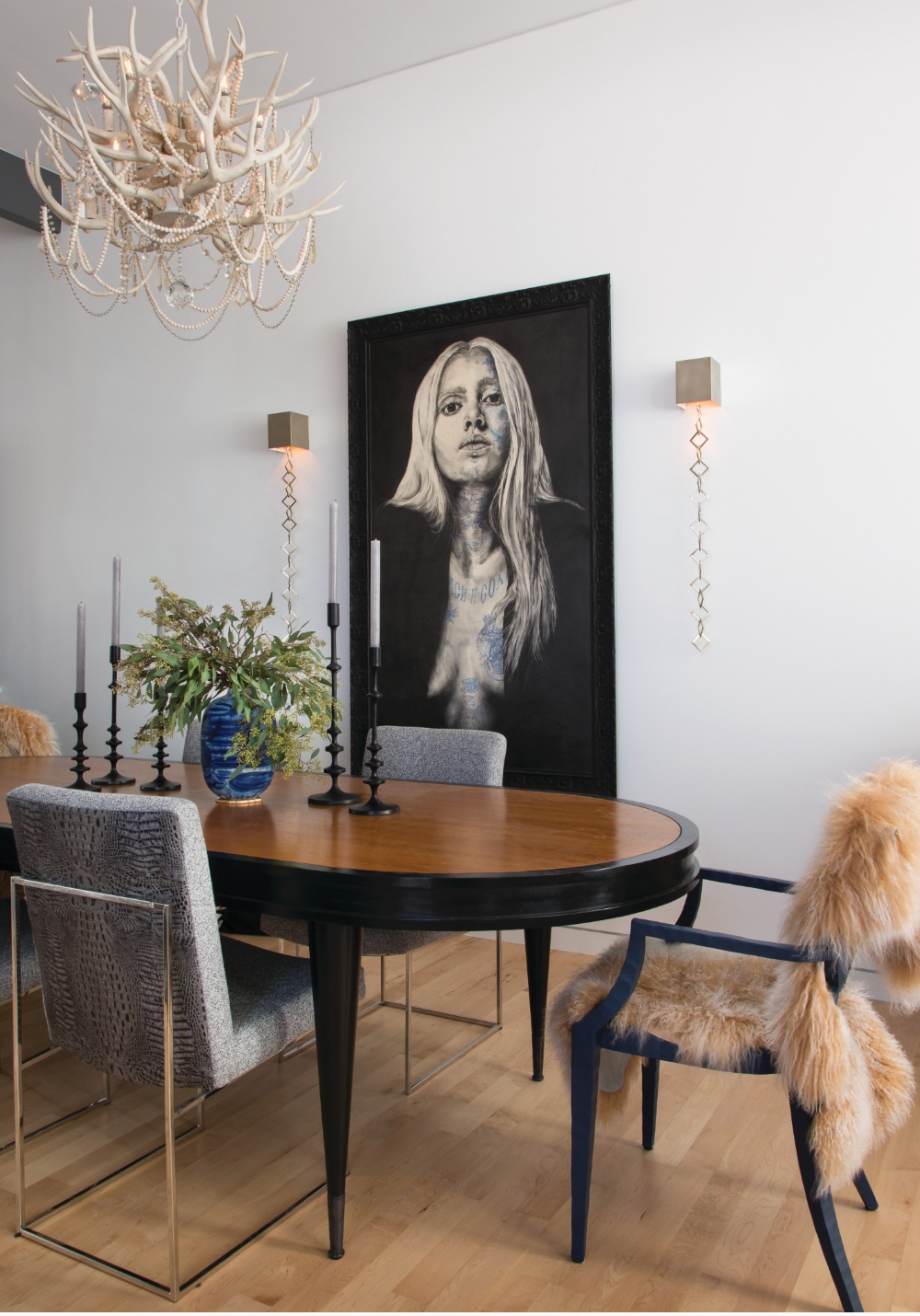 This painting by artist Gabriel Moreno was the impetus for the design of the entire home. “We hung the chandelier in the sky, because she didn’t want it to hang in front of her rad Russian girl,” interior designer Katie Schroder says, laughing. The Cheyanne Antler Chandelier is by Regina Andrew, the Natalie wall sconces are from Arteriors, and the Manolo dining table is from Objets, Ltd. 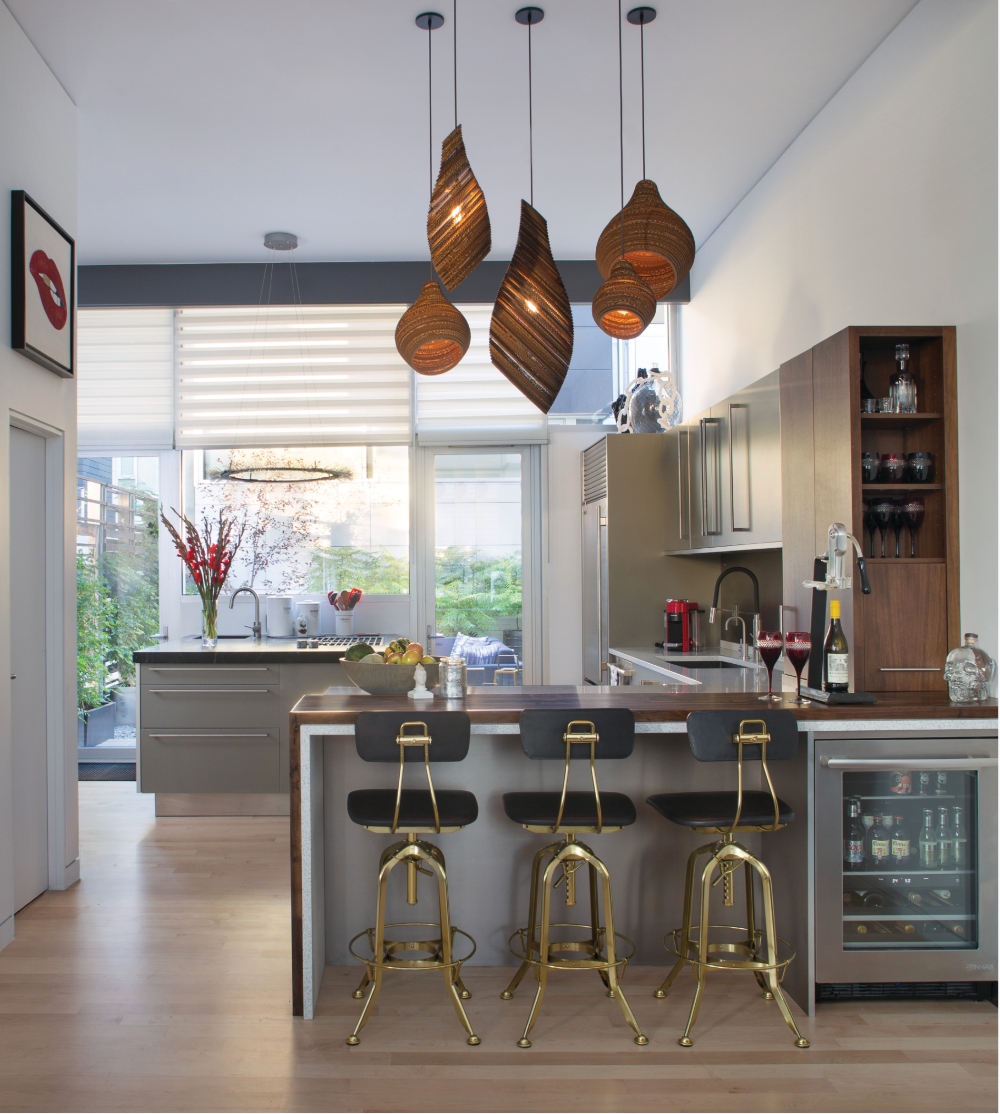 Schroder worked with Aspen Leaf Kitchens to add a peninsula in the kitchen to accommodate the bar area. Hive pendants, from City Electric Supply, above the bar are made from slices of cardboard and glued together. Local woodworker James Davis made the walnut bar top. 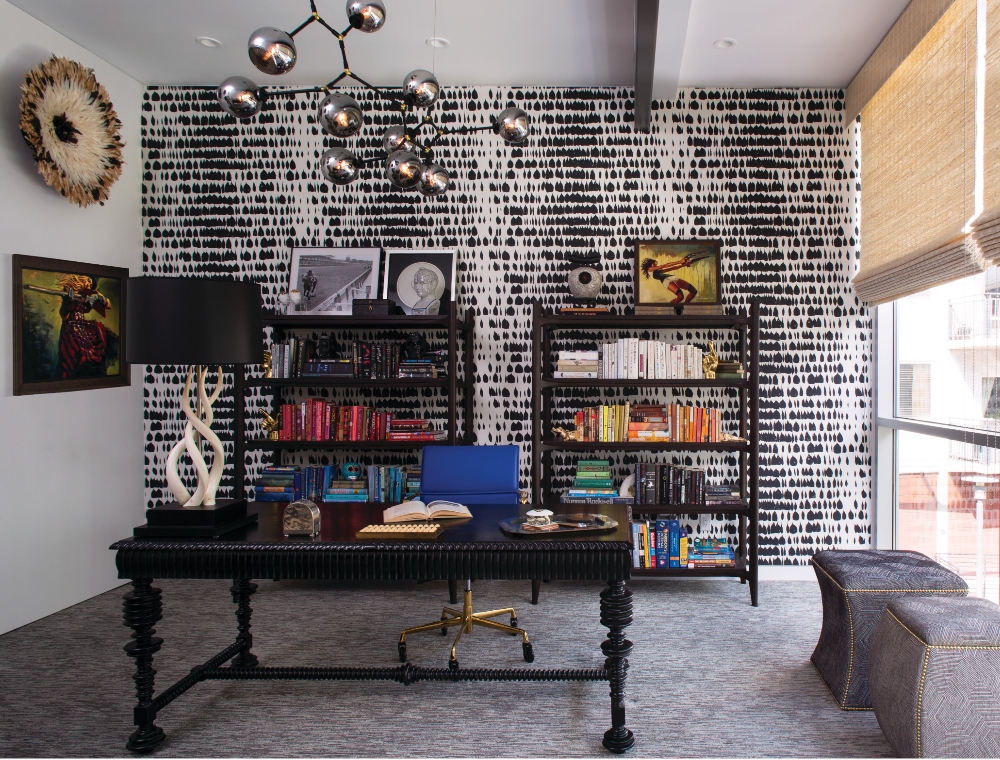 In the second-floor office, crisp Queen of Spain wallpaper from Schumacher sets the stage for the art and artful objects (the piece on the top left is actually a feather hat). Schroder chose the Nuevo Lighting Atom 10 Pendant Light from Eisen as a nod to the homeowner’s love of science. The Portuguese desk is from Objets, Ltd., and the Eurostyle Leander desk chair (“I always add a pop of blue,” Schroder says) is from Eisen. 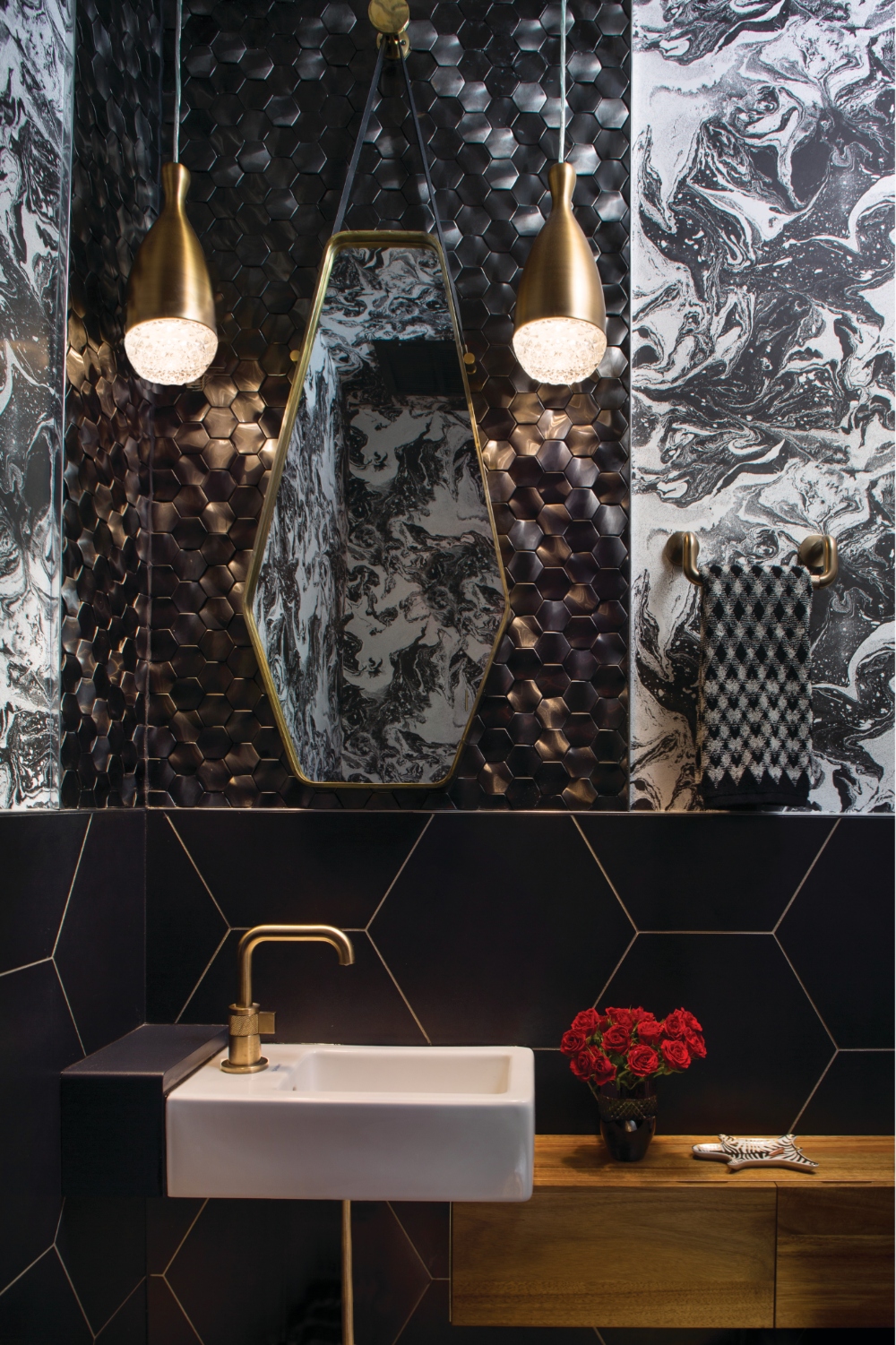 “The powder room is so small, it was almost like designing an airplane bathroom,” Schroder says. She layered textures and patterns with hexagonal metal tile from The Floor Club, marbled wallpaper from Osborne & Little and larger hexagonal tile by Decorative Materials. 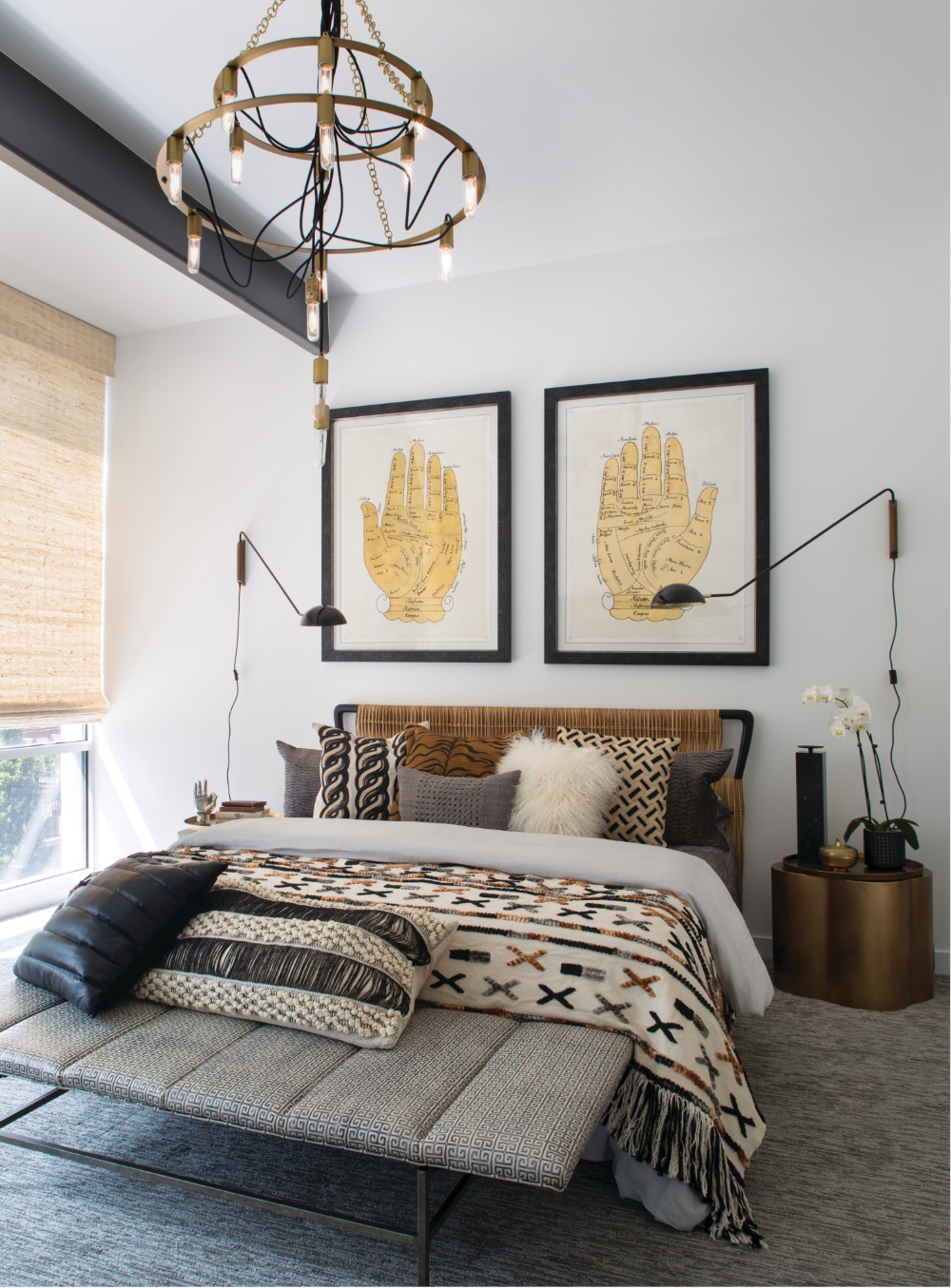 In the second-floor guest bedroom, Schroder masterfully wove together texture and pattern to create a sophisticated simplicity. The wall art is Natural Curiosities Gallicus Hands 1 and 2, from Egg & Dart, and the handwoven Dorado blanket is by CB2. 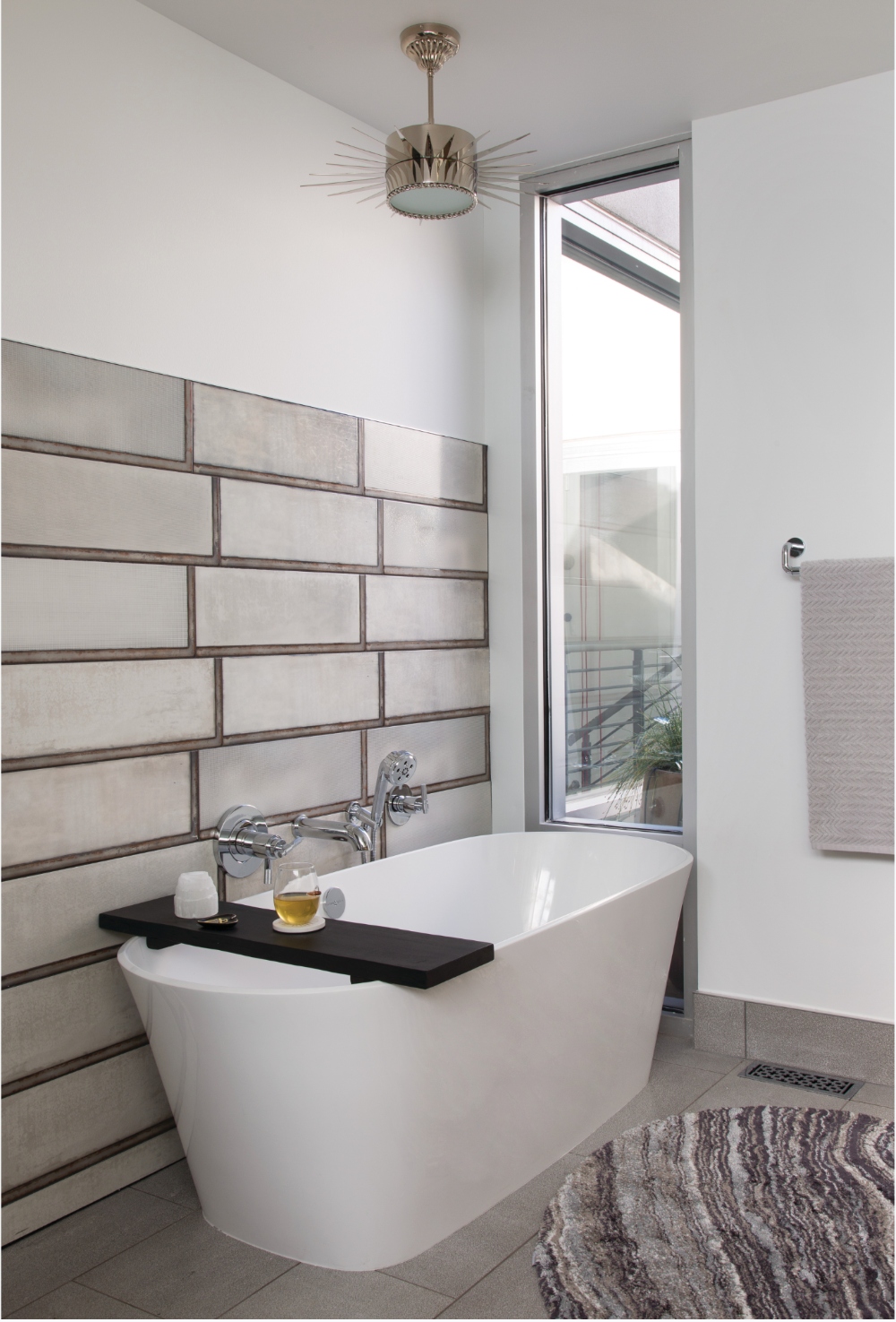 An unexpected, spiky Visual Comfort pendant light—a modern take on Art Deco—is the jewel of the master bathroom. The industrial glass wall tile is from Decorative Materials; the pendant and soaking tub are from BAC Ferguson. 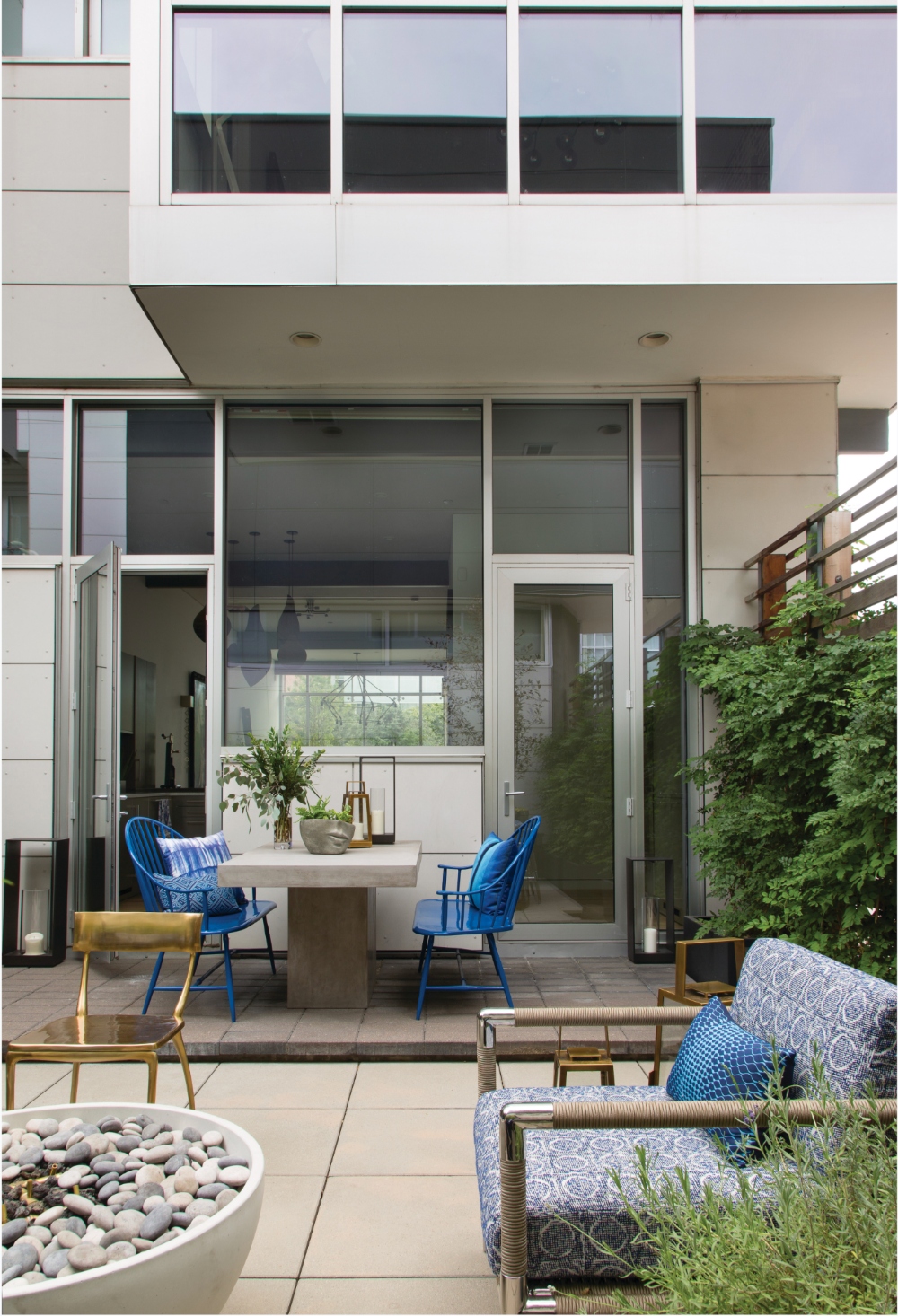 A concrete gas fire pit that doubles as a coffee table (the top is optional) is the focal point and gathering spot in the courtyard. Midas Gold dining chairs from CB2 add a bit of glam.

2020 Home of the Year Finalist