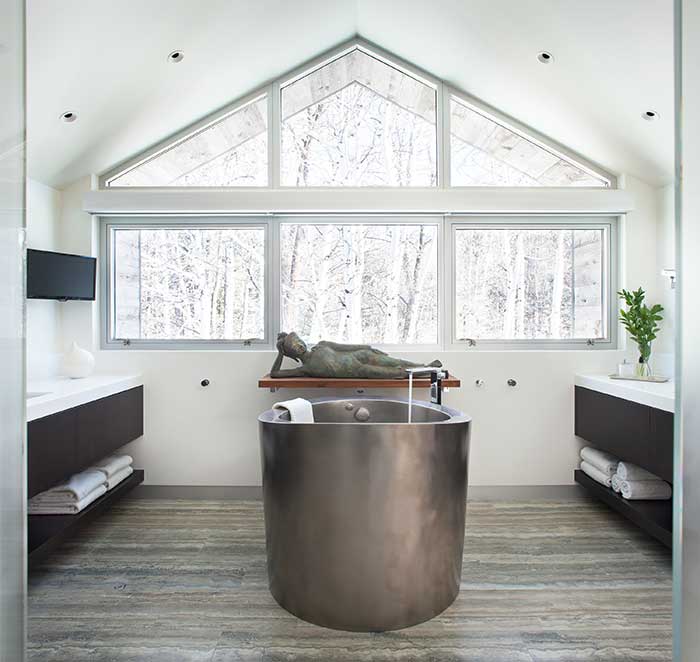 Take a look at this varied mix of inspired bathroom designs, from whimsical to elegant.

After a day of skiing or hiking, how about relaxing in a home spa? That’s what the athletic husband-and-wife owners of this Aspen mountain-home getaway had in mind when they modernized their 6,200-square-foot, formerly lodge-style abode. Rowland+Broughton project manager Amanda Christianson led a team that extended several wings of the house outward, expanding windows. Says Christianson of the renovation’s minimalist ethos, “We peeled away all the ornamentation to elemental forms.” Case in point: this 200-square-foot second-floor master bath, framed by a gabled dormer that overlooks aspen trees. Says Christianson, “The owners brought the idea of a Japanese-style soaking tub to us. We crafted the design around that.” The tub, by Diamond Spas, is brushed stainless steel. A gray travertine floor and countertops of white Thassos marble complement the timbers visible on the underside of the gable, which are made from reclaimed barn wood. There’s also a flat-screen TV (at left), a steam shower and a separate water-closet stall (behind the viewer in this angle). But pride of place goes to one of the couple’s favorite art works, a reclining-Buddha sculpture perched on a custom-made teak shelf. 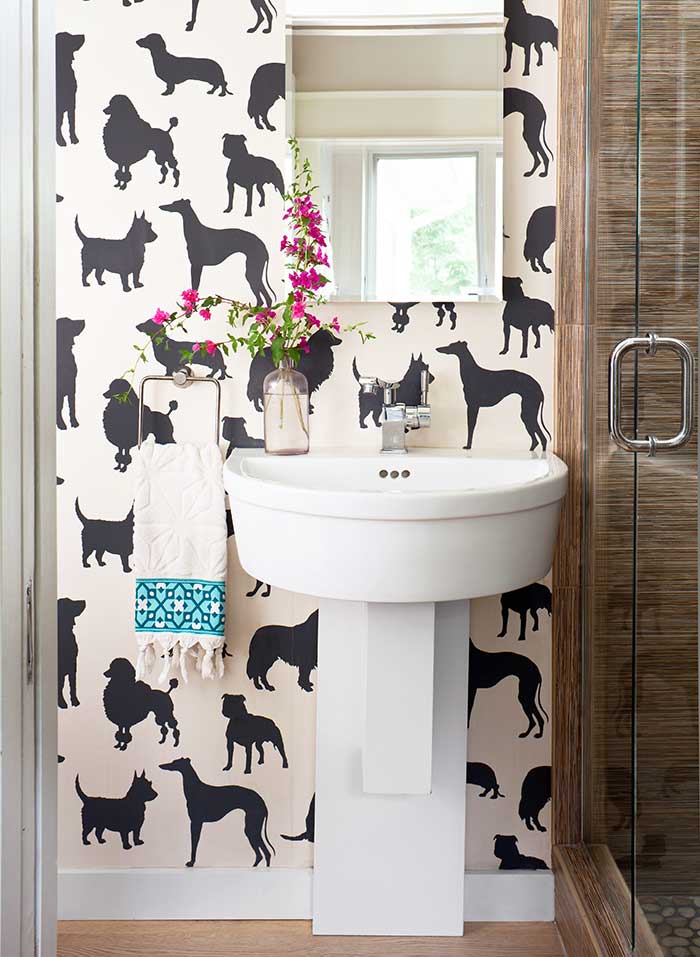 We dare you not to smile. “People just love it,” says designer Paige Blackburn, who created this canine-themed sanctum sanctorum as a diversionary tactic in her Mapleton Hill home in downtown Boulder. (It’s a three-bedroom, 2.5-bath Victorian built in the early 1900s, which now accommodates a busy family of five.) “I didn’t like what the previous owners had done with this bathroom,” she confesses. “Especially that shower tile, which we didn’t want to re-do. I wanted something really lively to take attention from it.” She covered a busy-patterned tile floor with simple wood—a complement to the white-painted wooden enclosure that hides the sink plumbing. Then she had a eureka moment at a Denver Design Center showroom, when she discovered this Osborne & Little pooch-silhouette wallpaper. “It’s such a fun pattern!” says Blackburn. “Scotties, Danes, poodles. There’s even a golden retriever in there.” We’re not sure what the family’s beloved retriever, Tar-Heel, makes of the design, but it’s definitely proof of how ideal small spaces are for adding some whimsy and humor without overkill. 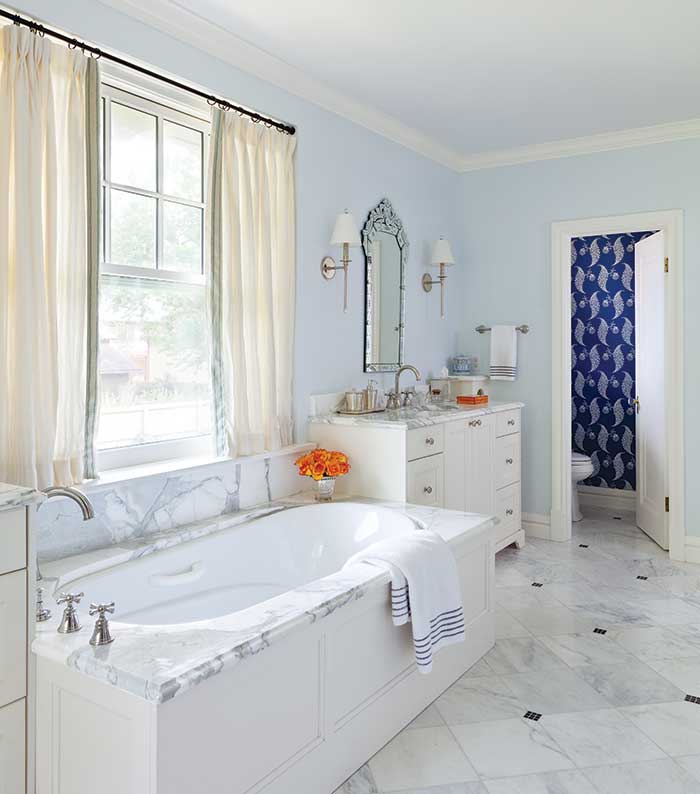 When your great-great-grandfather is Louis Comfort Tiffany, you grow up learning a lot about how to integrate architecture with interior design. That’s the unique backstory of designer Nadia Watts, who helped a couple with now-grown children remodel their historic Georgian-style home on Seventh Avenue Parkway in Denver’s Country Club neighborhood. A primary task was expanding the second-floor master bedroom and bath. By annexing another bedroom no longer needed, Watts and her team created a much larger en-suite space with generous window light. For décor, she took a cue from the couple’s large collection of blue-and-white china—one of their favorite color combinations. Many elements radiate a mood of tranquility, from soft window coverings (Ralph Lauren fabric with Samuel & Sons trim) to the wooden tub surround (Aspen Leaf Interiors) to the Benjamin Moore wall-paint shade of “Palest Pistachio.” But a strong counterpoint that really pops is the water-closet wallpaper from Farrow & Ball. It’s an updated paisley-block print, bringing a note of vibrant fun to an otherwise soft-toned, stately scheme.

“I wanted something that was very bold and powerful, but also serene,” designer David Hintgen of DH Interiors says of his color choice for this penthouse-apartment powder room, done for a 5,000-square-foot bachelor pad in the Four Seasons Residences in downtown Denver. Hintgen went for drama in each carefully chosen minimalist element: a walnut door with matching baseboard trim; cove LED lighting that makes the ceiling appear suspended in air; a pedestal sink from Vitraform made of mirrored bronze glass; an elegantly elongated toilet from Toto, echoing the oval of the sink; a limestone floor of silver travertine, cut into tiles forming a chevron pattern; and perhaps the nerviest piece in the puzzle, a monochrome wallpaper from F. Schumacher & Co. with a rough, leathery shagreen texture (it’s basically meant to be a synthetic form of sharkskin), in an intense shade of “Chinese orange.” An elegant art-light bracket illuminates a photo-print by Danae Falliers, who specializes in post-processed shots of vast, flat, lonesome, and wide-open spaces like plains, prairies, deserts, and oceans. 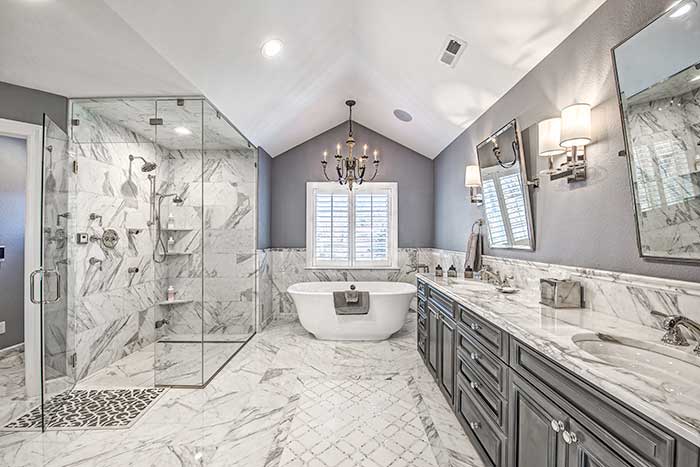 A mélange of gray lends distinction to this master bath in an Observatory Park two-story house. Restoration Hardware mirrors establish an emphasis on rectangular shapes, with oval his-and-her sinks as a counterpoint. All the fixtures sport polished-nickel finishes. The tub, by Victoria + Albert Baths, is made of volcanic limestone, while the main flooring and wainscoting slabs are Italian Calacatta marble, the veining of which picks up the gray in the wooden vanity cabinets. Designer Chris Awadalla of Denver’s Sanctuary Kitchen + Bath Design had a tricky time getting the shower flooring to match the marble, opting for a porcelain that holds up better to water. The shower enclosure was built frameless and curbless to make it airy and large, and multiple shower heads deliver steam, massage jets or spray. Awadalla added extra flair with a 3-by-7-foot diamond-pattern “tile rug” inlaid in front of the vanities. 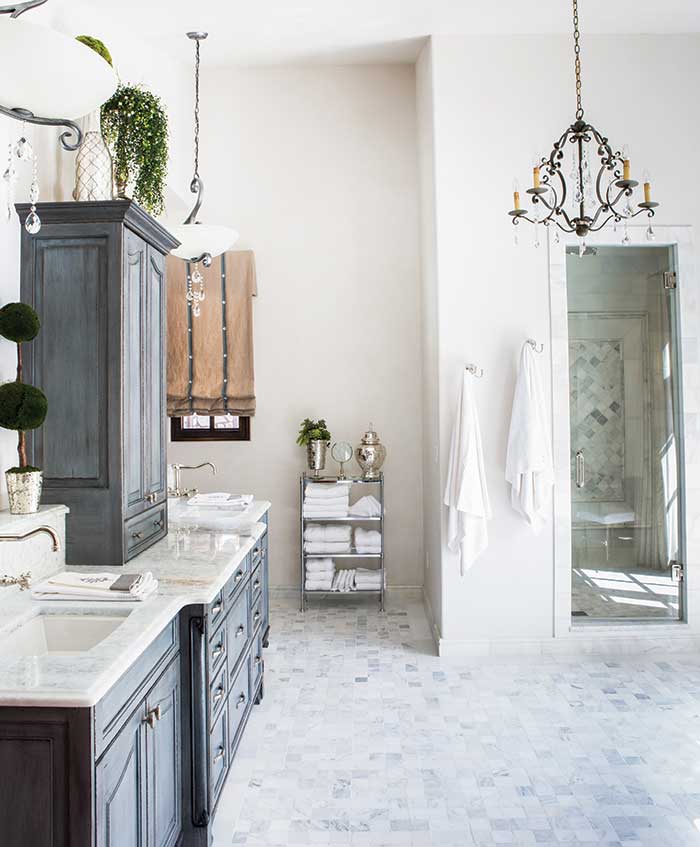 A Tuscan master to match a sprawling Tuscan-inspired property in Castle Rock. Jan Neiges, an experienced bath and kitchen designer, oversaw an expansion that fulfilled one of the owners’ fondest wishes: to have a doorway that opens to an outside shower patio. The inside luxury includes a glass-doored, step-in shower room (appointed with Classic Statuario tile in a mural wall pattern) and an elegant, free-standing MTI tub. With all the sunshine the house’s knoll-top perch brings, Roman shades keep the light down to an elegant glow as desired. A built-in speaker system by Sonos provides easy listening. In-wall faucet fixtures float above the his-and-her vanity sinks, and Neiges designed the maple-wood storage cabinets, she says, “to look like an heirloom furniture piece from Europe.” 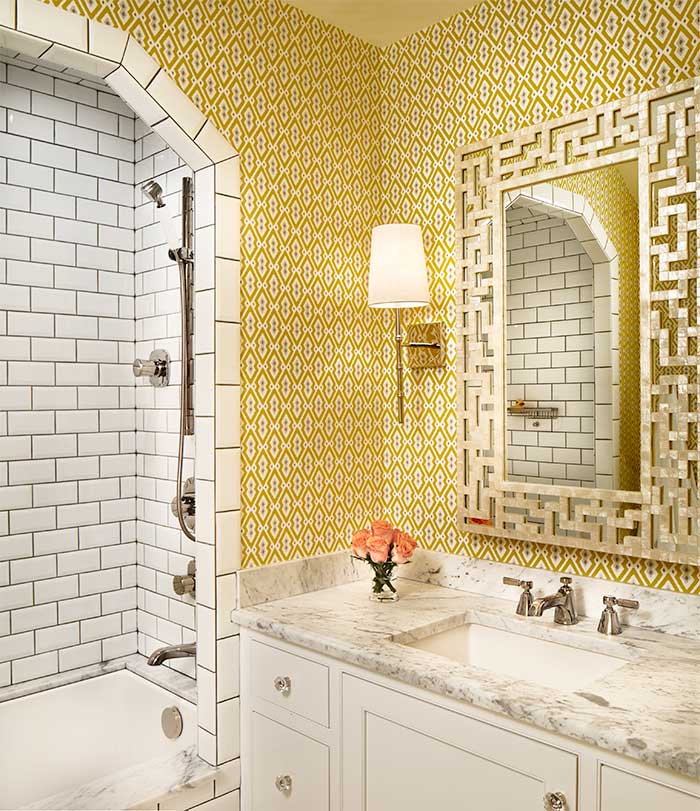 In commissioning a newly built living space for her family in Cherry Hills Village, homeowner Jenifer Marx had a tricky task. Working with architect Larry Cohen and builder Tucker Hollander, she wanted to use the same basic elements for five en-suite bathrooms in a five-bedroom house: octagonal floor tiles, Carrara marble for countertops, and varied forms of white subway tile for the shower and bath spaces. But for her 11-year-old daughter, Marx says, “I wanted something feminine and special. Something that would be inviting for a teenage girl.” The solution appeared when Marx, browsing through the home-design website Houzz, saw a picture of a tub with an elegant cove archway around it. She showed her architect and voilá, they created this inviting shower-tub space, fit for a ’tween princess. To minimize maintenance and make the tile pattern pop, dark-gray grout was used instead of white. The tiles have soft, beveled edges—another feminine touch. The design choices for the wallpaper, mirror and sconces were kept simple so they can be easily replaced if the daughter wants to freshen the decor in years ahead. But the beautiful bones of it will stay the same. “There’s something enchanting about it,” Marx says of the space, which her daughter loves. “It’s like having a treehouse or a fort or a fairy castle—enveloping and cozy.” 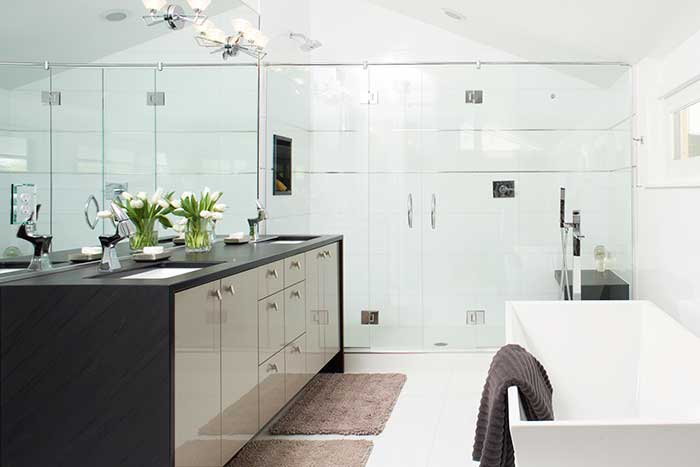 Realtor Rachelle Geller was elated a few years back when she had a chance to buy a 5,500-square-foot, four-bed four-bath home designed in 1954 by architect W.C. Muchow, perched on a hilltop corner in Wellshire facing three other houses also by Muchow. It had “spectacular bones,” says Geller. “I feel very special owning it.” But it needed freshening and streamlining—especially the second-floor master bathroom, a 16-by-8-foot, deep-avocado-green-tiled throwback with aluminum-framed sliding doors made of crackle glass. While removing the old materials, Geller’s team was startled to discover 19 inches of solid concrete under the original bathtub—the remains of a bomb shelter! Out it all went. What replaced it is a striking collection of rectangular shapes and lines with super-sleek white, black and light-tan finishes. The shower enclosure and large single-panel mirror by Mile High Glass set the clean, elegant tone. A custom-cabinet design team at Kabi put together the vanity, including cabinet and drawer fronts made of high-gloss acrylic in metallic beige; the waterfall-edge countertops and vanity sides are Caesarstone. The tub and faucets were found on Houzz. “I’ve always been in love with the simplicity and minimalism of 1950s architecture,” says Geller. “So I wanted to keep the update clean and modern, with powerful touches.” 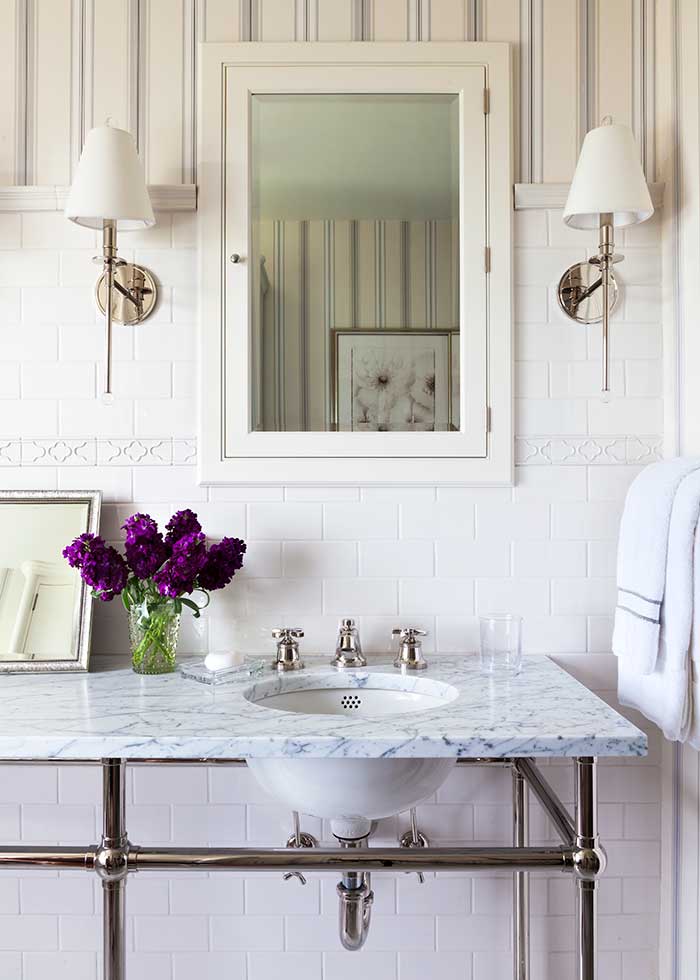 How do you make a roughly 6-foot-by-12-foot bathroom feel more spacious? That was architect Thomas Matthews’ dilemma, and the first thing that had to go was an old, porcelain-covered cast-iron tub. Acting on a tip from a plumber, Thomas figured out he could gut the tub himself with some well-placed blows from a sledgehammer. “It was hard on the house,” he recalls. “I popped a dozen screws in the ceiling below the bathroom, and picture frames on walls all over the house were catawampus.” But a beauteous makeover emerged from the chaos, built around an open, airy, double-sink marble washstand from Waterworks (Danbury, Connecticut) that’s all countertop with no boxy enclosure. Storage is now in a tall, shallow, small-footprinted “Empire Rosette” cabinet from Restoration Hardware on the opposite wall. The shower stall was opened up and streamlined with the removal of 12 inches from the side tile wall, and the glass door got a spectacular new cast knob from P.E. Guerin. Goodman Tile and Stone completed the lovely gray-veined flooring. Says Matthews, “There’s nothing like honed marble under your feet.”

The Most Popular Home Renovation Project