You’ll fall in love with these designs, in a mix of styles—all with relaxation and luxury in mind 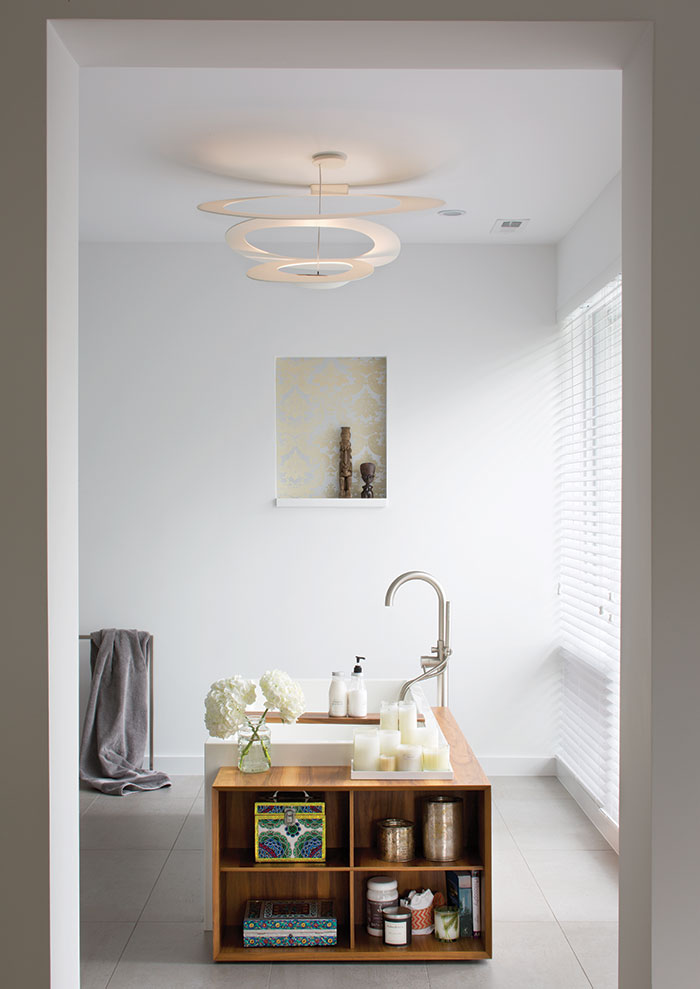 Sabine Taal is not a trained designer, but years of working with artists, she says, “taught me amazing lessons.” Those lessons inspired her to design the interiors of her own Denver home, including the 32-by-36-foot master bath with large-scale, concrete-look floor tiles and the dreamy Wetstyle M Metro Series tub with a walnut surround. While the tub is perfectly situated to take advantage of choice exterior views courtesy of a nearby floor-to-ceiling window, the view of the tub is just as arresting. With no doors separating the master suite’s rooms, the view into the bath “is like looking at a still life,” Taal says.

To complete the vista, she added a Graff faucet and a contemporary chandelier—the Pirce Suspension by Artemide—that is “interesting to look at from below as well as from the side,” she says. “I have to admit that the bathtub is barely used because my life is too busy. My time will come to relax in the tub when the kids are gone,” says the mother of three. “For now, it is my eye candy.” 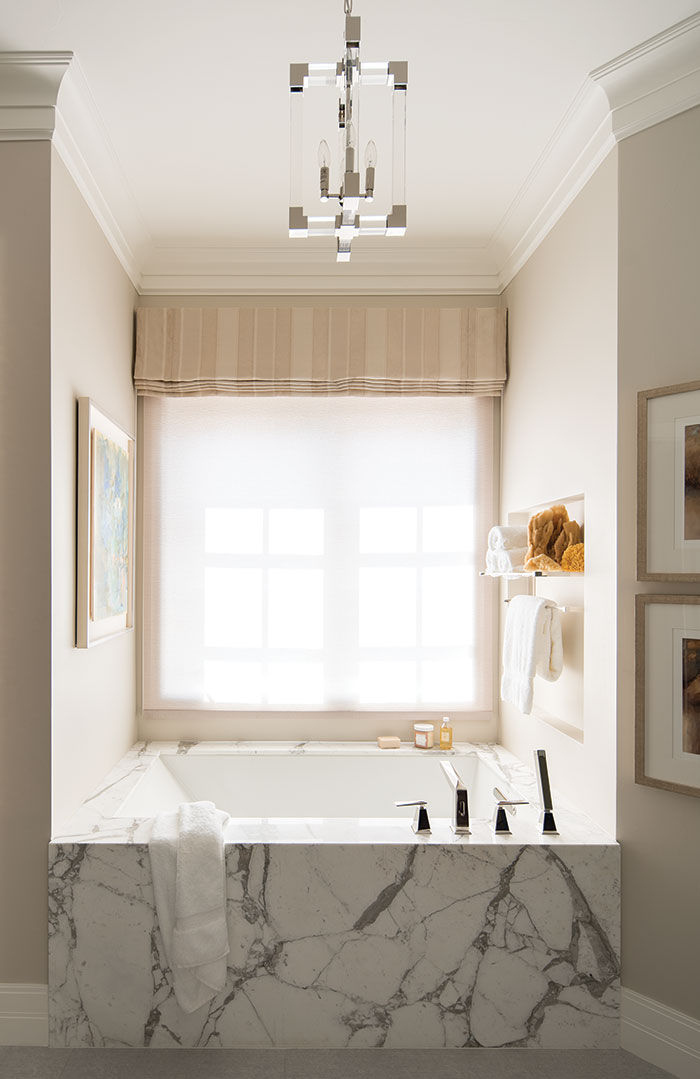 A dreamy, light-filled bathtub niche designed by Angela Whalen is the focal point of this master bath in an Observatory Park Modern Tudor home. “The tub was originally planned by the client as a Japanese soaking tub,” she says, “but my vision was for a modernized play on this home, so I quickly designed this tub wrapped with slab.” The slab—which covers the face of the acrylic tub and forms the surround—is “gorgeous Statuary Extra Calacatta marble from The Stone Collection and was fabricated by Charlotte Foley with Colorado Stone,” Whalen says.

Each of her finish choices, she says, were made to complement the new home’s clean architectural details, keeping in mind a juxtaposition of modern and traditional and an unwavering focus on simplicity. To that end, traditional moldings wrap the space at the floor and ceiling; acrylic—an unexpectedly mod choice—forms the towel bar, a shelf and the chandelier. Sleek-lined chrome tub fixtures are the finishing touch. 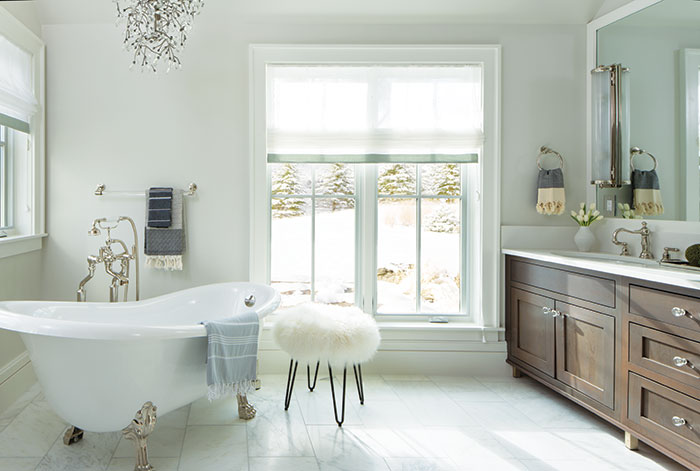 In this ranch-style Littleton home, the master bathroom has pride of place. “It sits in the southwest corner of the house, and I knew that room would just glow,” designer Beth Armijo says. “That’s the best light in Colorado.” And glow it does, thanks to Armijo’s light-reflecting materials and palette choices—Calacatta marble floor tiles, polished nickel fixtures, glass accents and walls painted what she calls “almost creamy gray.” The double vanity, in gray-washed alder, is topped with Caesarstone and a pair of large custom mirrors to “exaggerate the light in the room and increase that bright vibe,” Armijo says. Lights mounted on the mirrors are by Visual Comfort and “a little dressier than the standard light bar,” she adds.

Retail glass accents—vintage-style cabinet hardware, a metal-and-glass RH towel bar and a crystal-laden chandelier from Pottery Barn that mimics the snow-on-branches view—sparkle in the coveted light. “You have to be realistic,” the designer says about working within a budget. “We like to splurge on permanent things and then layer on personality” with value purchases. The shapely vintage-look tub and its fixture, she says, were one of those well-chosen splurges. “It is placed for the view out the window,” she says of the tub. “Just beyond the trees, you see a lake with a mountain backdrop. It is totally a retreat.” 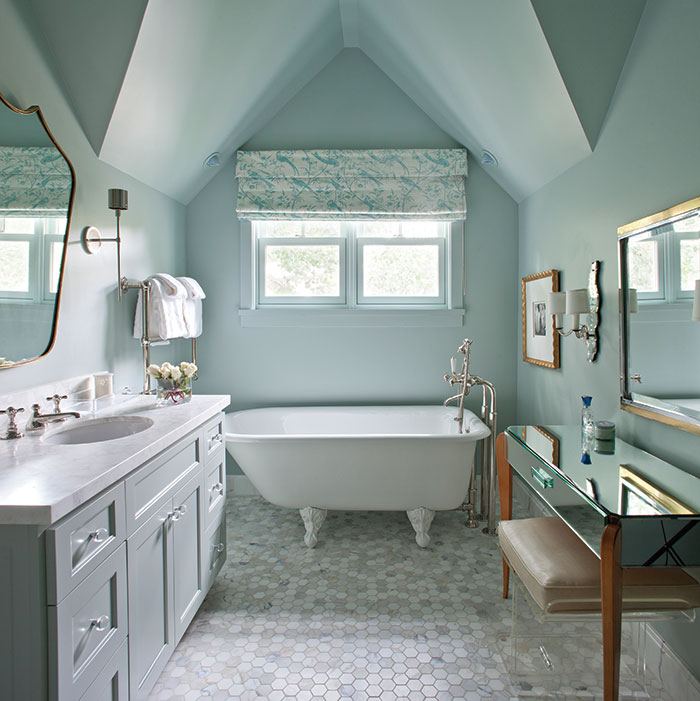 In Crested Butte, Jan Showers and Zara Taitt worked their designer magic on the second-floor gut remodel of a 19th-century shotgun-style home. Necessitated by the layout of the house, the bath is situated at the entrance to the master suite, “which is quite unusual,” Showers says. “That meant that the bathroom had to be treated with special care to make it feel like a beautiful entry.” To that end, the designers swathed every wall of the suite in rich gray-green Donald Kaufman #33 paint. Antique pieces—such as the mirrored vanity with French merisier finish on the wooden legs, the acrylic bench upholstered in leather and mirrors discovered on buying trips to Paris—along with a claw-footed tub and hexagonal marble floor tiles, recall the home’s provenance.

“The window treatment is a Brunschwig & Fils Bengali toile, which also covers the walls, bedding and window treatment in the master bedroom,” Showers says. “Because of its location, this room had to be very glamorous and inviting, and the colors and materials had to coordinate with the bedroom scheme.” 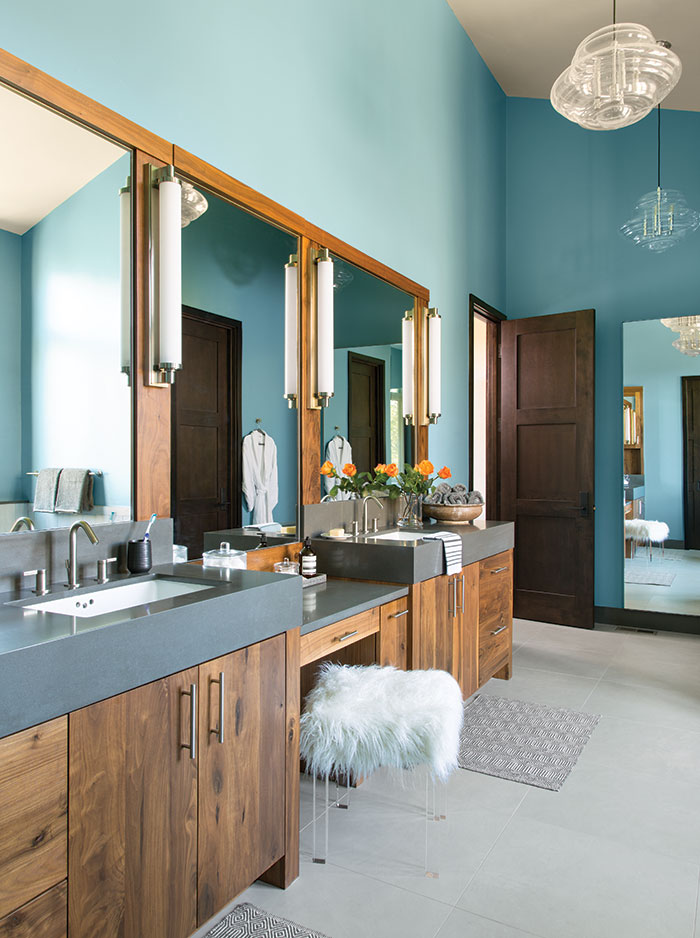 Blue Colorado skies inspired Tracie Schumacher’s design of this new 12-by-20-foot master bathroom. “The brighter blue wall color helped to accentuate the cool grayish-blue tones of the fixed finishes,” she says. “Had the walls been white, the details would have disappeared.” Those details include concrete-look, large-scale floor tiles and Caesarstone slabs in Raven for the vanity tops. Vanities crafted from rich walnut “really bring the blue walls back down to earth,” she says. And vintage-look glass pendants hang low to bring the high ceilings down to a more personal scale. Nestled between twin vanities, a dressing table with a fur-topped acrylic stool gives the homeowner—a mother with young children—a place to call her own. 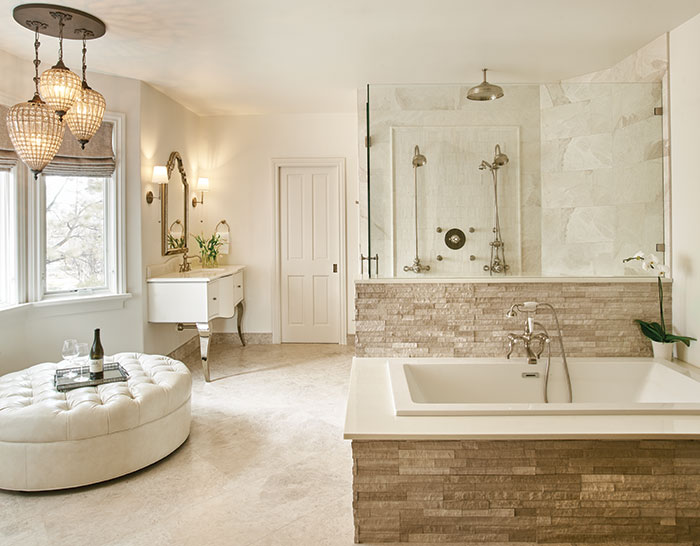 Inspired by the client’s “glam RH aesthetic,” designer Rebecca Pollard says, this rock-star-luxurious master bath was one piece of a whole-house Denver remodel. “We completely overhauled the original design of the room—moved all the plumbing; installed custom his-and-hers furniture-look vanities; and added a drop-in Jason air-jet tub, double shower, private water closet and window nook,” she says. Soft-white walls bounce the windows’ natural light through the room, where a palette of natural stones—marble, jadestone and stone veneer—keep the mood whisper-quiet.

The white lacquered vanities, with their shiny silver legs, are the room’s va-va-va-voom statement pieces. A large tufted ottoman dressed in white leather lounges in the window bay beneath an equally eye-catching chandelier. The single deviation from the neutral palette: linen Roman shades in a barely there lavender hue. The result, says Pollard, “is an inviting space that you actually want to drink a glass of
wine in.” 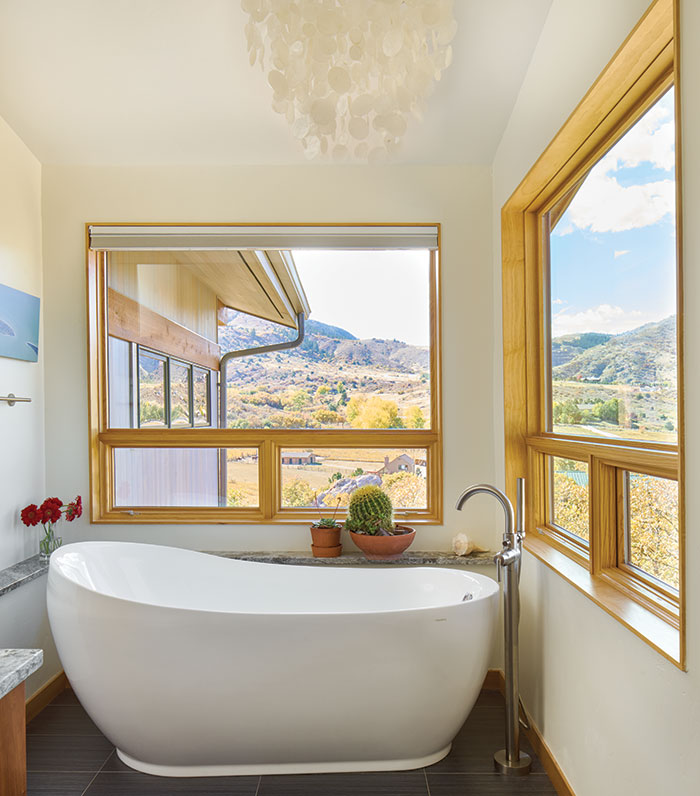 Architect and interior designer Karen Keating’s clients, both geologists, owned their breathtaking Red Rocks-area property for more than 25 years before building on it. “They bought it because it is a fascinating place—on the Front Range with huge outcroppings,” says Keating. “But they waited until retirement to put a house on it.” The driving force behind her designs was the vista surrounding the house. “We knew we wanted a freestanding tub to take advantage of spectacular views,” says Keating, who included her signature addition of a within-reach ledge for holding a glass of wine or a smattering of candles.

The whole house conforms to the same monochromatic scheme—gray, white and natural woods—which aims to push the focus outside. “Everything we did was about simplicity and done to not detract from the exterior experience,” she says. “It has always felt like the house should be a delicate vessel for these two people who enjoyed this site: camped, picnicked, sat on and walked it for many years. I wanted the house to augment that experience.” 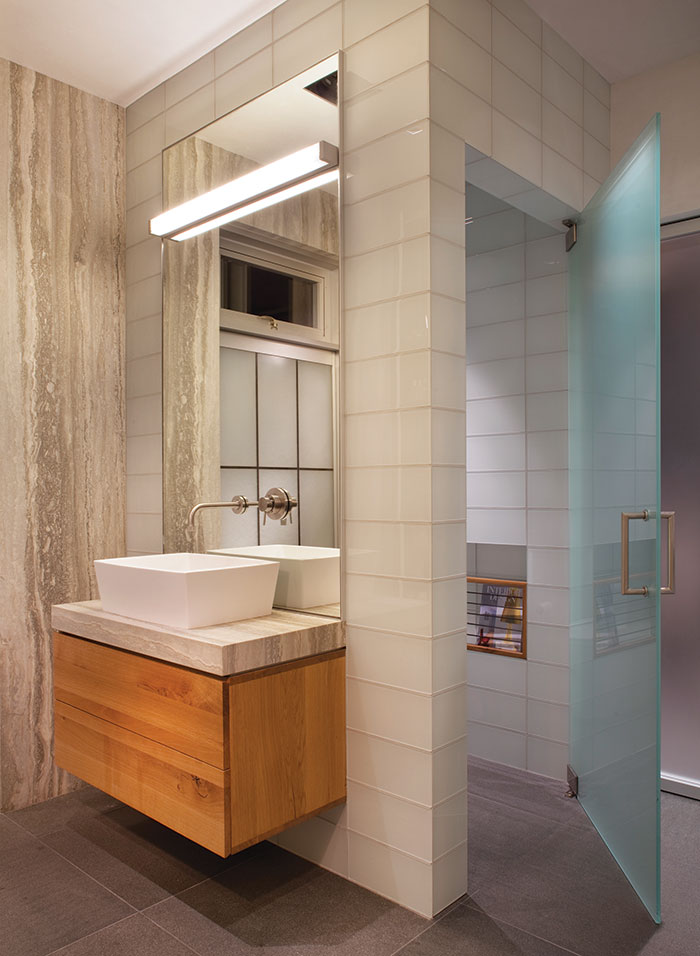 8. ALL THAT AND A MAGAZINE RACK

A singular materials palette—including flamed-black-granite floor tiles throughout and room-by-room appearances of reclaimed oak—connects this master-suite bathroom to the sleek, modern Aspen home to which it belongs. Slabs of silver travertine dress the walls of the bath and form the countertop on a custom reclaimed-oak, wall-hung vanity. “All fittings—the faucet, sink, etc.—are Boffi,” designer Sarah Broughton says. “We treat lighting architecturally; it is not meant to be decorative, and here it is incorporated into the design of the mirror.”

Behind the vanity, walls swathed in 6-by-12-inch white tiles enclose a water closet (complete with built-in magazine rack). Elsewhere in the room, a custom stainless steel tub by Diamond Spas (not shown) invites soaking, while a frosted window provides privacy but allows light to stream into the ground-floor room. “The room is really beautiful and soothing,” Broughton says. “The whole house is modern and clean, but warm.