“Hands on” could well be the mantra of architect E.J. Meade. “I like making things. I like the assembly, the notion of two things meeting, and how that can be expressed,” he says. “At Arch11, there’s a strong notion of craft and assembly and attention to the joint.”

Arch11, the Boulder firm co-founded in 1993 by Meade and James Trewitt, now has 20 employees in two offices, in Boulder and Denver, and does 90 percent of its work (both commercial and residential) in the Rocky Mountain West. “We’ve really tried to get a collection of people at Arch11 who are makers,” says Meade. “We’ve got cabinetmakers, people who make wedding cakes, so in addition to their architecture education, they have an engagement with the tactile qualities of the world. We also always try to have a leg in academia.” 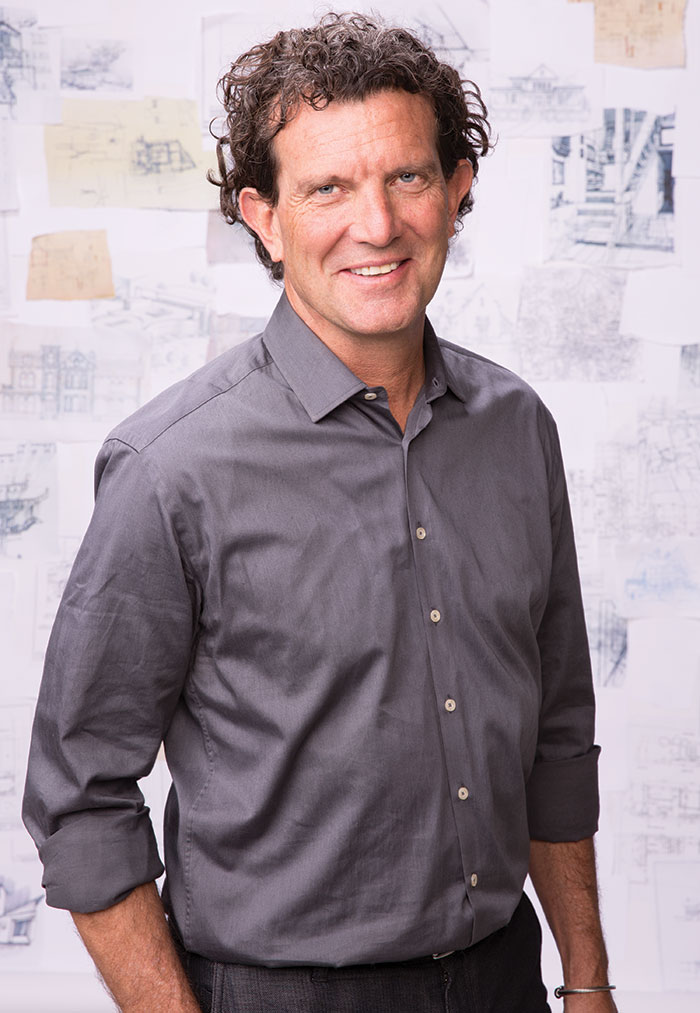 Meade, who grew up in New Jersey with views of the Manhattan skyline, always loved making things, whether he was helping his grandfather do construction as a teen, working at an antiquarian book bindery during his last year at Colby College or earning a living as a carpenter around New England after graduation. He then went on to study architecture at the University of Washington before completing his master’s at the University of Colorado. “I came out to Boulder on vacation and was like, wow, I’m never going back East,” he says.

As a principal at Arch11, Meade aims to achieve architecture as “unrepeatable as a cloud,” as poet W.S. Merwin might put it. “If we were just selecting details from previous projects in order to solve a problem, that would be less than satisfying,” Meade says.

A fully committed client helps. “I’m looking at three models right now, and all three clients were really engaged in the process. The result is that they got architecture out of it—not just a house.” 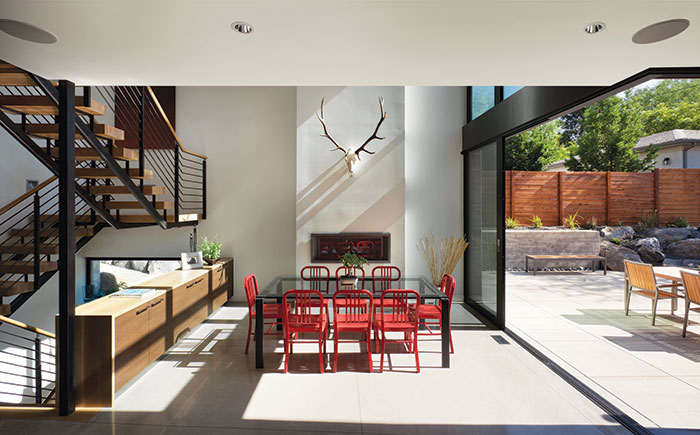 “E.J. offers a rare blend of vision, pragmatism, artistry, perfectionism and Zen-like calm,” says client Sue Heilbronner, CEO and co-founder of startup accelerator MergeLane. “All
of these qualities run throughout my home, making it a stunning, organic, livable space.”

And how would Meade himself define his style of architecture? Ultimately, he says, paraphrasing Bob Dylan, “I’m just trying to make it rhyme.”

The power of one—plus 10: “Twenty-some years ago, we were trying to come up with a name for our firm. We had a Latin dictionary out, we were thinking of Gaelic words, and then someone blurted out a line from Rob Reiner’s movie This Is Spinal Tap: ‘How about Arch11? It’s one more than 10.’ We paused and said, ‘Wow, it sort of works. It’s got a humorous underlay but also strikes at what we’re really trying to do, which is go beyond. Why not?’ ” 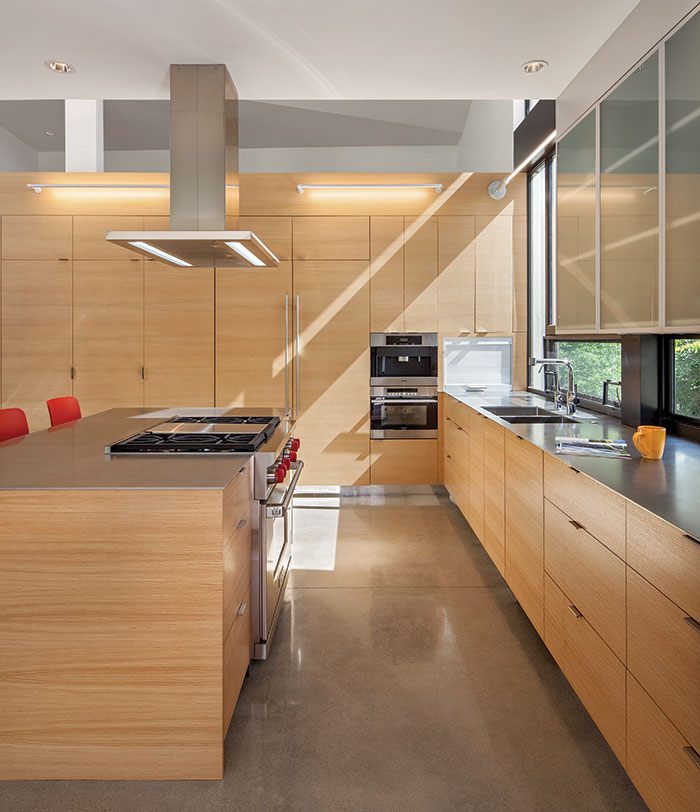 For the energy-efficient "6th Street House” in Boulder, Arch11 strove to make every space, including the kitchen, "active" and connected to nature. [Photo by Raul J. Garcia]

“Architecture is like any creative endeavor. It can tell a story; it can have a narrative to it.” —E.J. Meade

If I had a hammer: “As a kid, I liked to build things. I took a ton of art classes, and my grandfather was an epic tinkerer, always putting an addition on the house or something, and I worked with him a lot when I was a teenager. I remember as a child meeting [architect] Ben Thompson and seeing one of his buildings. My father said to me, ‘Here’s the man who drew that building.’ I was like, ‘People draw buildings? That’s amazing.’ ”

Value added: “My family moved to a 1740 farmhouse that was exactly the halfway point between New York City and Philadelphia, and my parents decided to put on a small addition. My mom, who was an antiques buff, wanted it to look exactly like the original house, but my dad said it should be a white abstract cube. I can remember him explaining to her how making the addition look exactly like the rest of the house would devalue the quality of the original, and by doing something that was of its time, it would give the original more value. He was right.”

Room with a view: “I was a philosophy and American studies major at Colby, which makes perfect sense. I remember reading [German philosopher Martin] Heidegger, who was talking about technology being able to explain the phenomenon of nature. That’s what architecture tries to do: be a viewing lens to the phenomena around us.”

Playing the angle: “In Colorado, we’re constantly working against the topography. Everything’s sloped, or you’re looking at a slope. How does the building, either by contrasting it or emphasizing it, allow you to experience the topography? Colorado also has amazing light, but it washes out just about every kind of small detail you put on the house—it’s almost Mediterranean in its intensity. We look hard at how the light penetrates a house throughout the year and throughout the day. How does the house admit it, reflect it and protect you from it?”

Take it to the limit: “Ours is a practice that always pushes against the limits. It could be an economic limit, it could be topography . . . And it’s great to all of a sudden have a new set of limits to push against. We produced a net-zero house at about 9,300 feet elevation in Colorado, and we heard from different people who wanted to do it elsewhere: One was in the Appalachian forest in northern North Carolina, and one in the high desert of California. How do we start looking at where they are and adjust the house for that? It’s a great intellectual puzzle.” 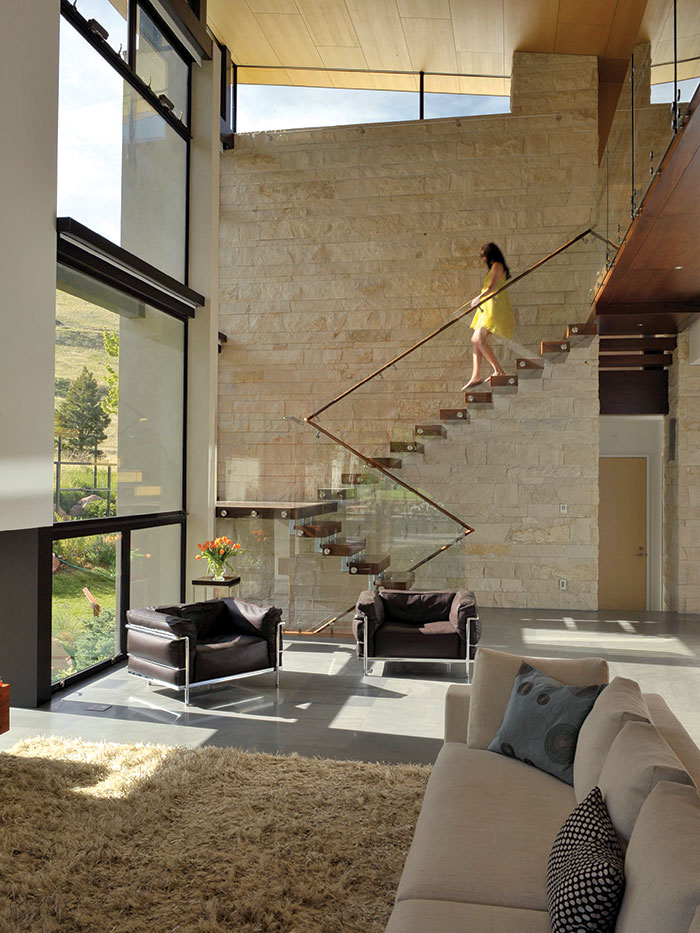 Arch11’s Syncline House was designed with retracting glass walls to capture the views, as well as innovative renewable-energy systems and rooftop gardens. [Photo by Michael Shopenn]

Oodles of doodles: “For one of my very favorite projects, the client came to us with a really rugged, barren site—I don’t know if there was a single tree on it. He said, ‘I have these seven pieces of art that I want to house’ and more or less left it at that. Part of my nightly ritual is that I sit down after dinner and do one very abstract charcoal drawing. I showed the client one drawing, which didn’t even resemble architecture, and he got it. He said, ‘It’s like a Donald Judd piece.’ He was able to let us have enough leeway to find the right path to the solution for the house, which puts the art forward and is in itself artful but super minimalist.”

All over but the shouting: “At this point in my practice, I’m more interested in architecture that starts to disappear rather than be fully in your face, so it can recede and the way in which you live can be present, or the site can be present. It’s very easy to make something complex and visually stimulating—maybe overstimulating. It’s very hard to do something that is quiet, understated and articulate without shouting.”