Daring design demands a confident eye and a steady disposition. This Denver home, selected as Colorado Homes & Lifestyles’ Home of the Year, benefited from both. We talked with the fearless homeowner and her equally intrepid designer, Andrea Schumacher of O Interior Design, about the pay-off of creating the bold, the beautiful, the unexpected.

CH&L: This remodel is in its third year. What’s taken so long?
The Homeowner: We bought the house in 2001 because of the lot. The interior was dark, so our first attempt at making it ours was to paint everything cream. It was depressing in its blandness. In 2007, we decided to open the house up by pushing out walls and using color with abandon. What started as an arthroscopic procedure became full-blown, bone-cracking surgery, but we’ve gotten the joy we wanted.

Schumacher: One of the challenges was incorporating the homeowners’ many beautiful family heirlooms and art from their travels. We drew elevations of every room showing where pieces might be used and then revised them based on feedback. Walls of bookcases, for example, became open doorways, so we had to reconfigure where certain pieces went. Everything had to be well situated to showcase the family’s possessions. As for color, we pored over hundreds of swatches. The homeowner loves a multi-layered look, so we spent countless hours comparing different fabrics against different wall colors. 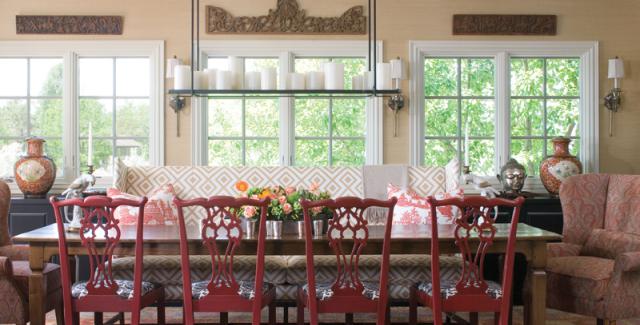 CH&L: We love the multi-layered look, too. Tell us how you put that fabulous dining room together.
The Homeowner: We rarely entertain formally, so I wanted a dining room that could double as a family room, a place where the kids could do homework or puzzles while I was in the kitchen. I bought the wood table at Sheptons Antiques and put our two deep red tapestry-covered wingback chairs at either end. Because I love couches, I bought a high-back couch and covered it in a David Hicks contemporary light brown-and-white fabric. Facing that couch, on the other side of the table, are four Chippendale chairs in a traditional black-and-white fabric. Technically, nothing goes with anything else—style-wise or color-wise—but it works for me.

CH&L: Yes, but what if the reality hadn’t matched the vision, and the dining room looked horrid?
Schumacher: That was the great thing about this homeowner. She buys what she loves, not because it’s for a specific area. Had the high-back couch looked less than fabulous at the dining room table, she might’ve moved it to another room and brought four chairs or a bench from another part of the house. She loves what she buys—whether it’s high-end or from Target—and is confident everything will look great somewhere. There simply are no regrets for her.

CH&L: We hear the kitchen wallpaper has a story. Do tell.
Schumacher: The homeowner fell in love with this Stark hand-painted silk paper from China. But it had pink in it—not her favorite color. We asked for a sample to be painted without it. Then we determined how many butterflies, flowers and birds we wanted in each panel. Back to China it went until we got just what she wanted. It took a year from start to finish. Then, of course, we had to make sure it could withstand cooking grease, so it was sealed with Proseal and tested with spaghetti splatter. It passed the test.

CH&L: And the color green on the island?
The Homeowner: That’s Cat’s Eye Green from Benjamin Moore. I didn’t want an all-white kitchen, and the island is a focal point. It’s positively vibrant. 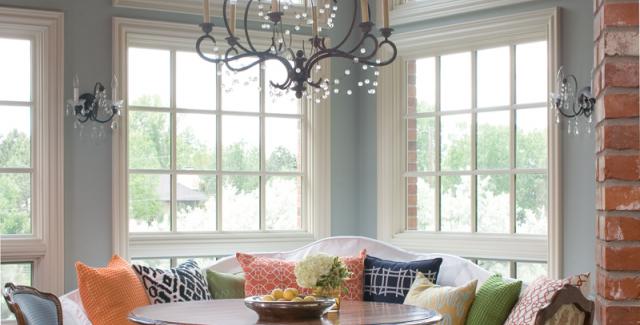 CH&L: The master bath is an oasis of calm—Moroccan-inspired but not a Moroccan fantasy. How did you do it?
Schumacher: The homeowner loves it. We spent more time choosing things for this room than any other. There’s an exotic serenity: the freestanding Kohler tub, the full blue-and-white drapes in front of the floor-to-ceiling windows, the chandelier, the black-lip oyster fireplace surround, the deep walnut floor in a herringbone pattern. The  shower has blue, Moroccan-shaped tiles from Waterworks. And the floors are all radiant heated.

CH&L: Many people would describe this house as eclectic; but that would be cliché, we think, and a disservice to this design, which surely has its own inimitable style. How would you describe it?
Schumacher: Not Old World, but worldly. It reflects the owners’ travels and heritage and the wife’s appreciation of other cultures. It’s a house of layers, textures, colors and art. It’s not deadly serious, but it’s not silly either. It makes a true statement about the wild creative spirit of the people who live here.