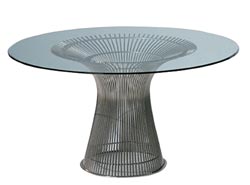 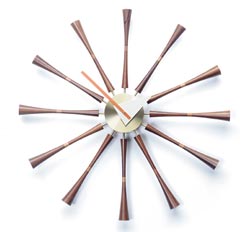 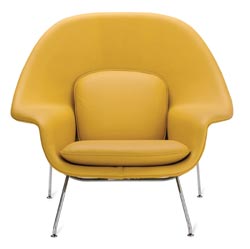 1. The 1940s and ’50s were exceptional years for furniture, marked by brazen originality, technical innovation and a design sensibility that was purely American—inspired by U.S. confidence in its presence on the world stage.

2. In large part, World War II sparked the furniture design heyday. A decline in homebuilding freed up architects to focus on furniture; wartime industry spawned mass-production technology; and young brides eager to have their soldiers home following the war rushed to furniture stores to begin a new chapter in domestic life.

4. The era gave birth, so to speak, to the now-iconic Womb Chair, designed by Eero Saarinen. More than a famously comfy place to rest, it made a statement about Saarinen’s belief that chairs should support bodies as they
actually sit and not as they ought to sit.

5. Designers ditched ornamentation for streamlined silhouettes. Take the Pedestal Chair Collection of 1956, also designed by Saarinen, who said: “The undercarriage of chairs and tables makes an ugly, confusing, unrestful world. I wanted to clean up the slum of legs and make the chair all one thing again.”

6. New materials ruled. The heavy woods of traditional European pieces gave way to bent plastics, molded plywood (fashioned by the Eameses), and wire and aluminum—abundantly available thanks to technological developments in the aircraft industry.

7. Living spaces got smaller following the war, and furniture followed suit. Scaled-down pieces began to relate to the needs of the people living with them rather than the architecture housing them.

8. In 1946, for the first time, the Museum of Modern Art curated a one-man show, entitled, “New Furniture Designed by Charles Eames.”

9. By 1947, the furniture industry had become the second largest producer of retail items in the U.S.

10. Just as seating structures broke away from tradition, a daring mix of outrageously shaped clocks sprang up for the first time, led by designer George Nelson. The public embraced it, and it quickly became a ‘50s fashion trend.