10 Things to Do in Denver

Whether you’re a transplant looking for a bucket list of adventures in the Mile High City, or a first-time visitor searching for vacation ideas, there is unforgettable Colorado fun to be had with these 10 summertime outings—excerpted from 100 Things to Do in Denver Before You Die [Reedy Press, 2016] by Rich Grant and Irene Rawlings. 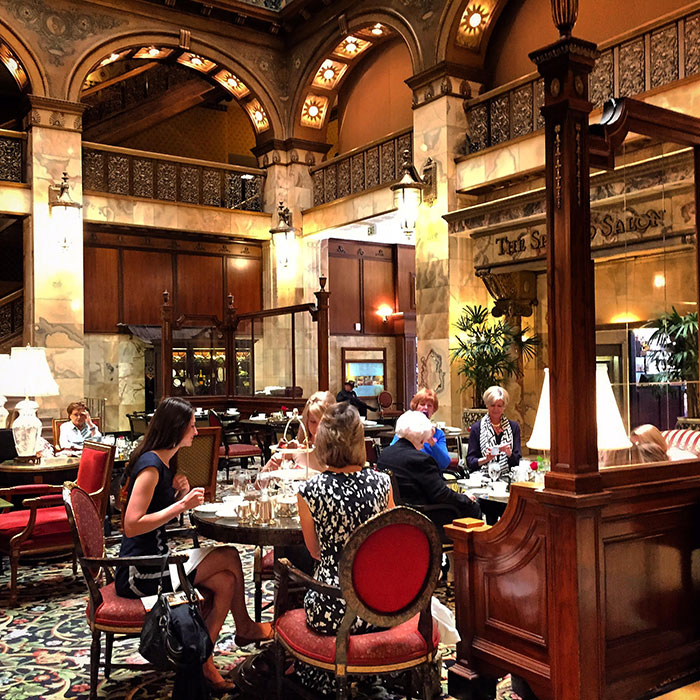 1. HIGH TEA AT THE BROWN PALACE

A tradition in Denver for decades—a traditional British high tea in the atrium lobby of the historic Brown Palace Hotel. Plates laden with cakes, cookie and cucumber sandwiches. Soft harp or piano music in the background. A long list of teas and coffees…or maybe a glass of champagne or a kir royale. Grandmas take their granddaughters here before a performance of The Nutcracker. Husbands and wives meet here after a busy day at the office. Girlfriends have a civilized bachelorette party here. Everyone dresses up just a little. To kick off the Holiday Season, the amazing annual Champagne Cascade—a tower of 6,000 glasses filled from the top (it takes 122 cases to fill all the glasses.) 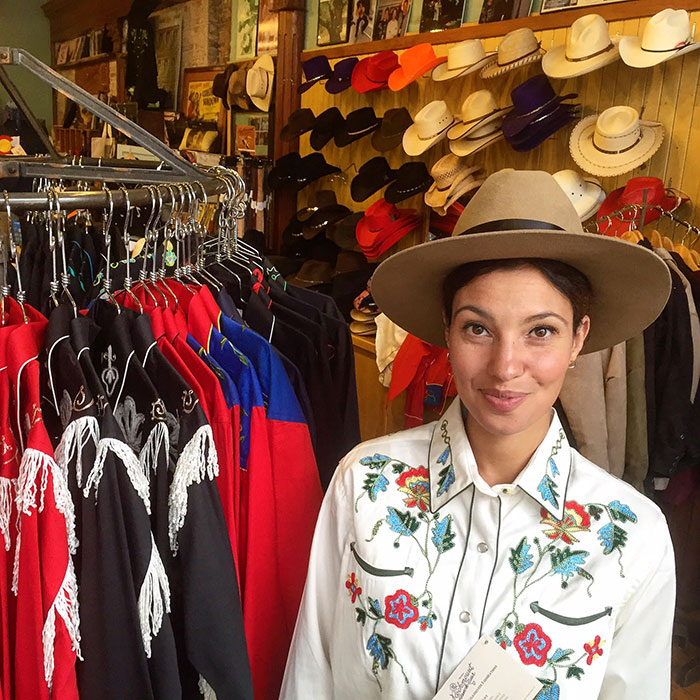 In 1949, Papa Jack Weil invented the modern cowboy shirt by using snaps instead of buttons. The shirts started showing up in Western movies and were loved by everyone from Clark Gable to Elvis. A legend was born.

Papa Jack made and sold Rockmount shirts on Wazee Street until he passed away at age 107. Today, his grandson Steve Weil runs the business in the oldest surviving store in LoDo. Every square inch is packed with western shirts, hats, belts, buckles, and boots.  Bob Dylan, Bruce Springsteen and Sting have shopped here, and you’ll see Rockmount shirts on everyone from Paul McCartney to Eric Clapton. As Papa Jack said, “The West is not a place, it’s a state of mind.”  And that means if you’re wearing a Rockmount shirt, you take the West with you, wherever you go.

3. JOIN THE BOTTLING CREW AT STRANAHAN'S

Every three weeks, 32 regular folks work a five-hour shift at Stranahan’s Colorado Whiskey Distillery. They work side-by-side with the distillers—corking, labeling, capping shrinking, tagging, boxing and serving as whiskey quality control.  The pay? A free lunch and a bottle of Stranahan’s that they’ve labeled themselves. Here’s how it works, you sign up, a lucky 50 are selected for each bottling, and the first 32 to respond are in.

Or just go to the distillery for one of eight free daily tours. The hour-long tour explains how Stranahan’s Colorado Whiskey is made and includes a free tasting of Colorado’s most precious gold. Reservations are recommended. 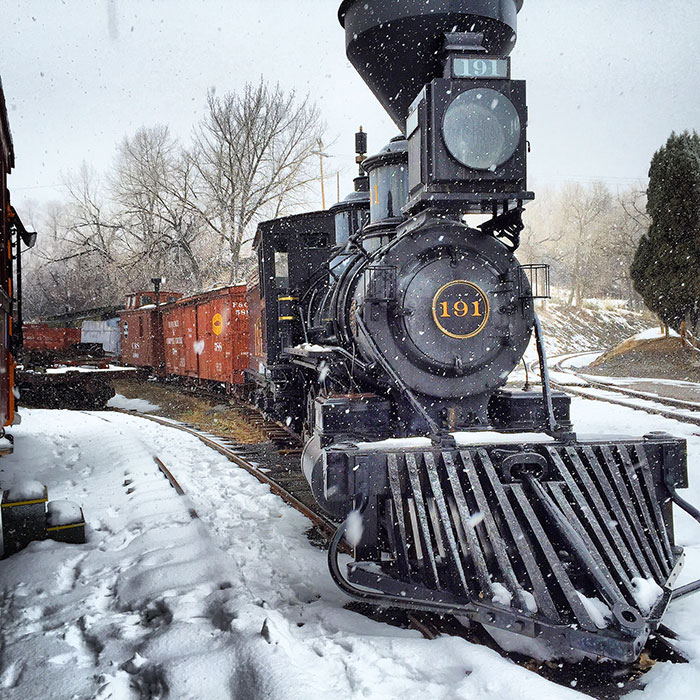 4. ALL ABOARD AT THE COLORADO RAILROAD MUSEUM

At one point, there were 2,000 miles of narrow-gauge tracks—burrowing through rock, crossing trestles over rivers, and climbing steep canyons—to connect Denver with mountain mining towns.

The Colorado Railroad Museum in Golden has a half-mile circle that is like a giant’s toy train layout.  You can ride a live-steam train (once a month, check the website for schedules). They also have a rare Galloping Goose—a1923 Pierce-Arrow limousine mounted on wheels with a bus attached to the back.  This have-to-see-it-to-believe-it train now offers a bumpy, noisy and extremely fun run around the tracks.

At Christmas, the Polar Express steams in three times every night. Santa hops on board and hands every passenger a small silver bell. Cold weather makes the steam clouds rise higher and, in the dark, with the soundtrack of “Polar Express” playing, the whistle blasting and the bell ringing, it’s a cacophonous but magical moment.

The Colorado State Parks in the metro area are very well known but can be just as spectacular as the national parks.

Roxborough is a completely natural “Red Rocks,” without parking lots and roads. Trails wind around and through the 70-million-year-old rocks. Eldorado Canyon is world famous to hardy bands of extreme rock climbers. For everyone else, it’s an easy hike up a spectacular canyon with towering walls above you. Bring a jug and for a small fee you can fill it with fresh water from Eldorado Springs.

Staunton State Park  is wonderful for mountain biking (7 miles each way) to a waterfall.

Golden Gate Canyon has the best mountain panorama on the Front Range. The view stretches from the nearby Indian Peaks to Rocky Mountain National Park and all the way to Wyoming. 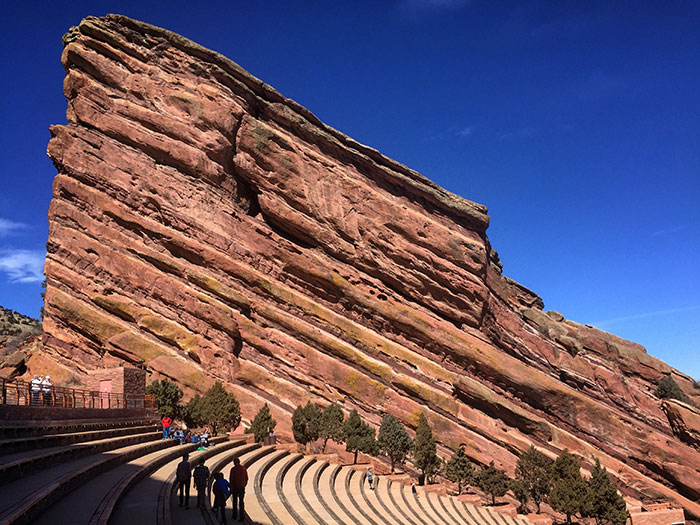 6. DO THE STAIRS AT RED ROCKS

Sure, it’s a world-renowned concert venue but Red Rocks is also one of the top places to workout in Colorado.  There are 138 steps from the stage to upper concession area and more than a 100 more steps descending to the lower parking lot. Racing or even just walking the stairs at 6,400 feet above sea level is a true workout. Bring water. People also run the full length of all 69 rows of bleachers (the equivalent of three miles). Denver fireman train here, doing all of the above while carrying someone on their back. On summer weekends, as many as 2,000 gather at 7a.m. to find their Zen, do the downward dog and greet the sunrise with Yoga on the Rocks. Tickets are $12 and sell out fast. 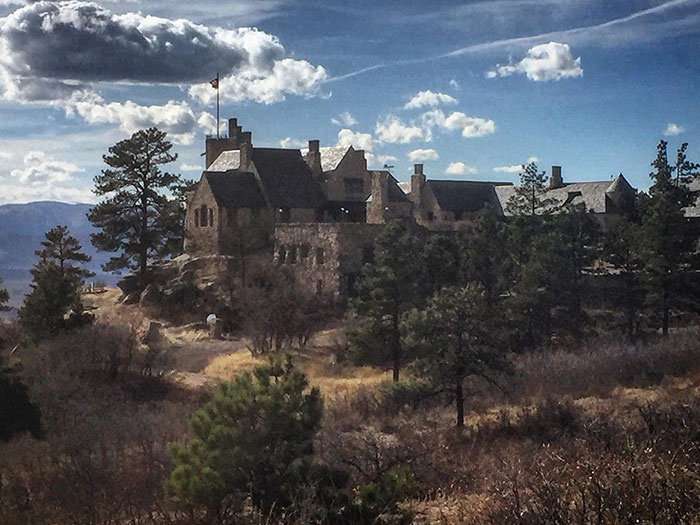 7. SOLVE A MURDER AT CHEROKEE RANCH

The Cherokee Ranch was homesteaded in the late 19th century and preserved by a wealthy cattlewoman (she bred Santa Gertrudis cattle here). Her name was Mildred Montague Genevieve Kimball, but everyone called her “Tweet.” When she died, she willed her thousands-of-acres ranch to be protected as a wildlife sanctuary. Her home (honestly, it’s a Scottish castle) is a museum that shows Tweet’s collection of art, furniture and memorabilia from her travel around the world. Views of the entire Front Range from the porch. The Colorado Symphony performs here. So does the Denver Center Theater. You can have a tour and an authentic English-style tea or sign up for one of the much-anticipated Murder Mystery Dinners. Was it the butler in the pantry? Or maybe Colonel Mustard in the billiard room with the candlestick?

8. DANCE TO A MARIACHI BAND AT CINCO DE MAYO

Start off with the low rider parade, graduate to watching Aztec dancers and finish off munching on street tacos and ears of hot buttered corn in Civic Center Park at the nation’s largest Cinco de Mayo celebration. Why Denver?  Colorado has more than one million Hispanics (21 percent of the state, 34 percent of Denver residents are Hispanic). Cinco de Mayo honors an obscure 1862 battle in Mexico against the French, and the holiday is hardly even celebrated in Mexico. But in Denver, it has become a celebration of Hispanic culture packed with mariachis, taco stands, low riders, green chile, folklorico ballet, hip hop Latino singers, Brazilian dancing, cervezas and of course, margaritas for all. The event is staged in Civic Center Park the weekend closest to May 5. Some top rock groups from Mexico perform on three stages. 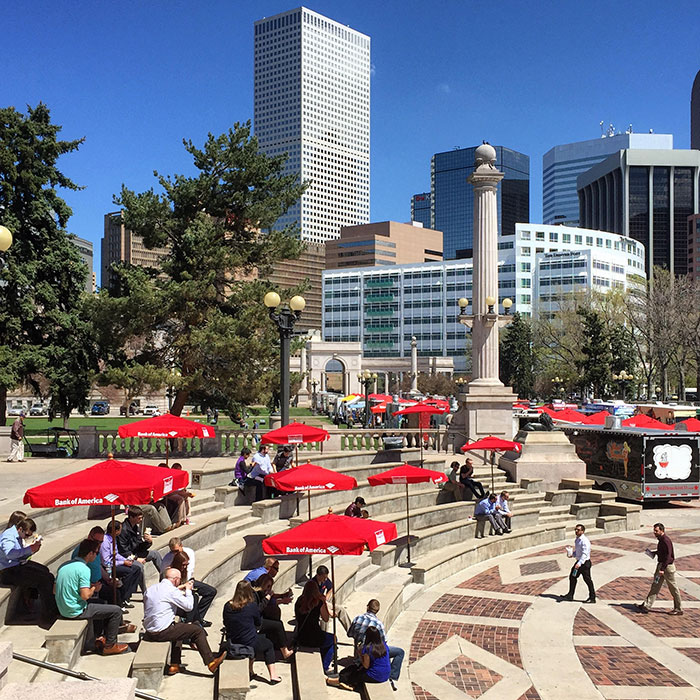 The only National Historic Landmark in Denver, this flower-and-statue filled downtown park hosts some of Denver’s largest summer events.

The People’s Fair, a hippie holdover from the 1970s, is held the first weekend of June. This huge neighborhood party of 200,000 people fills the park with music, beer and dozens of booths celebrating arts, crafts and local causes.

Stop here at lunchtime (on Tuesdays and Thursdays, from May through October) when Civic Center Eats becomes Metro Denver’s largest food truck roundup. More than 40 trucks and carts offer everything from lobster rolls to empanadas to cupcakes. There are tables and chairs for lunching in among the flower gardens.

On Labor Day Weekend—Taste of Colorado (small bites from Denver top restaurants) and the Festival of Mountain and Plain (carnival rides, free concerts and state-fair type booths selling everything from T-shirts to beef jerky).

Yes, the water is cold (much of it was probably snow just the week before) but there are some wonderful tubing adventures along the Front Range, especially on 90-degree days in August. The Clear Creek Whitewater Park in Golden is especially inviting because there are a dozen man-made whitewater chutes, some light rapids and drops, but also plenty of places to just float along.

You can tube in May and June but the water can be pretty cold, requiring wetsuits. The folks at Colorado Water Sport will set you up with tube rentals, advice and maps.

TIP: Idaho Springs (23 miles west on I-70 from Denver) has become the adrenaline capital of the Front Range with more than a dozen companies offering all classes of whitewater rafting on Clear Creek, known for having more rapids per mile than most of the other commercial rivers in Colorado.

READ MORE:
Grab your own copy of 100 Things to Do in Denver Before Your Die at reedypress.com or at Tattered Cover Book Store in Denver.